Tired of reading? See the Asgardian Stones screenshots below and then claim one of the bonus offers of our recommended casinos to play for free or real! 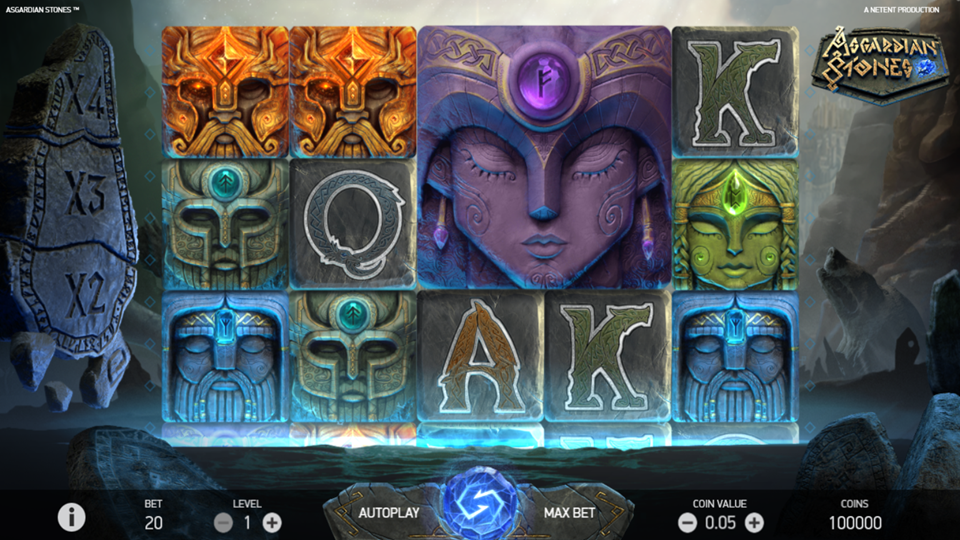 At first, players should decide will they play for fun or for real money. If you opt for the first case scenario, the good news is the Asgardian Stones Free Play grants a large number of demo credits to be used to learn how to win and make no investment at all. Both modes come with the same gameplay where is needed to collect 3 or more items of the same kind appearing from the leftmost in order to get coins according to the paytable. Also, you can use the Wild to replace all other items but the Bonus Wheel.
Now, set the bet level from 1 to 10 and the coin value from €0.01 to €1. According to your strategy, wager between €0.20 and €200 per round by placing 20 coins per a bet level. Instead of spinning, symbols fall from above, while a winning bet line starts the Avalanche feature where the winning icons explode and make room for a second Avalanche. This feature keeps going until there are no more wins. After the first Avalanche, you can activate the Colossal Crush as explained below.
In both base game and during the extra rounds all symbols may appear as Colossal symbols of 2x2 or 3x3 and provide increased winning odds. Odin, the father of gods, appears as the Super Colossal Symbol occupying a 3x3 field and if crushes the icons beneath, you’ll definitely score a big win. In normal circumstances, you’ll get 40, 100 or 500 coins for 3, 4 or 5 icons, respectively. Other gods pay between 10 and 300 coins for combinations of 3 to 5 of a kind. Rune-like playing cards such as Kings, Queens, and Aces have a smaller payout rating and bring a maximum of 30 coins.

1. What kind of special features can you expect?
When a Bonus Wheel symbol forms a 3x3 block on the reel 3 and after all Avalanches stop, the Asgardian Stones Bonus round will start. The wheel will start spinning and reveal Coin Wins, the Asgardian Stones Free Spins, or both. The number of extra rounds is determined by the number of rows the 3x3 block occupies. The Coin Win is 1x, 2x or 5x the total bet with the maximum big win of 36x your stake.
2. Are there any limitations when playing on a mobile device?
Play online on all NetEnt-powered sites using any modern mobile device as there is no need to download the iPhone app or the Android .apk file for this purpose.
3. What is the RTP factor of Asgardian Stones?
According to the official info, the RTP is 96.31%.

This is a low to medium volatile slot machine with stunning visual effects and decent payouts. Tips received in the Asgardian Stones recension will help you score more often, so try them and see the bankroll boosting immediately.

Play Asgardian Stones at the best NetEnt casinos online - reviewed and approved! Our recommendation is based on a wide range of aspects: they are accepting international customers, offer a broad range of payments for you, i.e. Neteller, Bank Wire Transfer or MasterCard, and provide plenty of games from NetEnt as well as other providers Eyecon, Blueprint Gaming or Wazdan