Enter the mystical world of EGT’s Amazon’s Battle and explore everything that it has to offer. Start out on top by reading our Amazon’s Battle slot review, telling you everything you need to know about this progressive EGT slot. The brave warriors of Amazon’s Battle are fierce enough to offer the player great payline wins. Take on the role as an Amazonian Warrior and fight for the good cause and you might be compensated with big wins.

Want to see how Amazons' Battle works? Select a recommended casino site from the list below and start playing for free or real – our screenshots will give you a sneak peek! 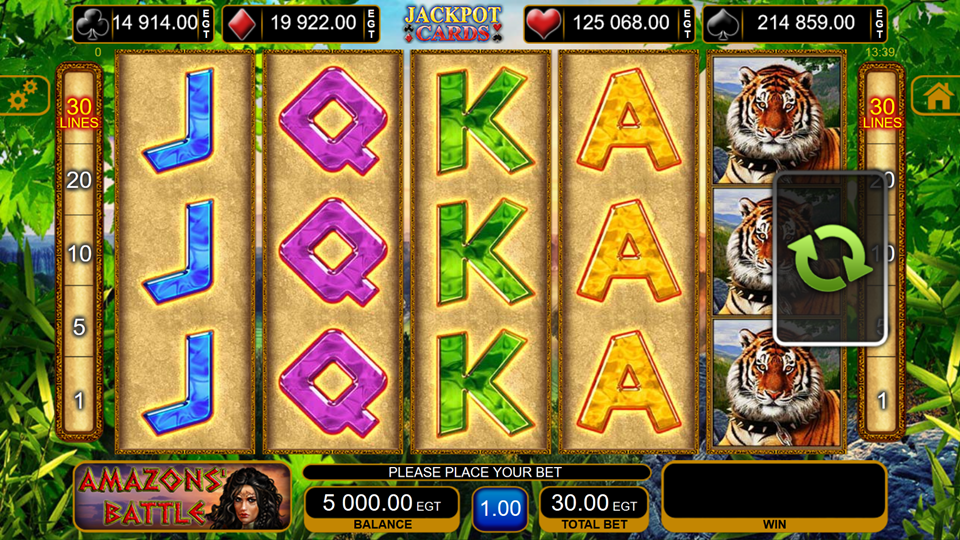 Amazon’s Battle takes place on a 5-reel and 3-row play grid and 30 paylines. How much you’d like to bet is up to you: wagers can be adjusted from 30 to 600 coins per spin. Players might score big with the Amazon’s Battle wild symbol which may grant cash prizes of up to 20,000, provided the player wagers the highest possible amount of 600. 7, 15 or 30 Amazon’s Battle free spins can be launched by 7, 8 or 9 Amazon’s Battle scatter symbols respectively. The wild symbol doesn’t just replace other symbols, but it also acts as a stacked symbol. This means that it will stack to expand to all positions of its reel. Players can make use of the auto-play feature which is integrated into the Amazon’s Battle interface for a comfortable gaming experience. Moreover, every concluded spin offers the chance to crack the progressive jackpot of Amazon’s Battle. All wins of up to 5250 coins can be gambled in the double-or-nothing bonus game. If you want to gain some experience while playing for fun, go to the website of EGT and test the free play version of Amazon’s Battle.

1. What kind of special features can you expect?
The stacked wilds and the stacked scatter symbols are quite unique. You rarely see two such symbols together in one slot machine.
2. Are there any limitations when playing on a mobile device?
Participate in the Amazonian war games and play online wherever you are on your Android or Apple mobile device. Players won’t even need to download an extra app or APK-file
3. What is the RTP factor of Amazons' Battle?
The software provider of the fantasy-themed slot has not published the official RTP (return to player) factor of Amazon’s Battle.

Should you be brave enough to give Amazon’s Battle a few spins you might even score the stacked wild symbols or benefit from the Amazon’s Battle free spins feature. The slot gives off very chilling vibes with its unique Amazon-theme. Our overall rating is quite positive, although the game doesn’t feature any multipliers.

Play Amazons’ Battle at the best EGT casinos online - reviewed and approved! Our recommendation is based on a wide range of aspects: they are accepting international customers, offer a broad range of payments for you, i.e. Neteller, MasterCard or Bitcoin, and provide plenty of games from EGT as well as other providers 1x2 Gaming, Wazdan or Rabcat