Couch Potato is a great slot for the couch potatoes among us! The slot was released by Microgaming in 2003, and remains a solid favourite for players looking for something simple but effective. The game has only 3 reels and 1 row, featuring symbols that fans of classic slots will recognise – bar symbols, cherries, and the lucky number seven. This Couch Potato slot review and rating will outline the basics of the slot, and tell you all about the special features, so keep reading!

We have no free play mode available yet, but take a look at the Couch Potato screenshots instead. Or why not simply giving a try with one of the recommended casino sites above? 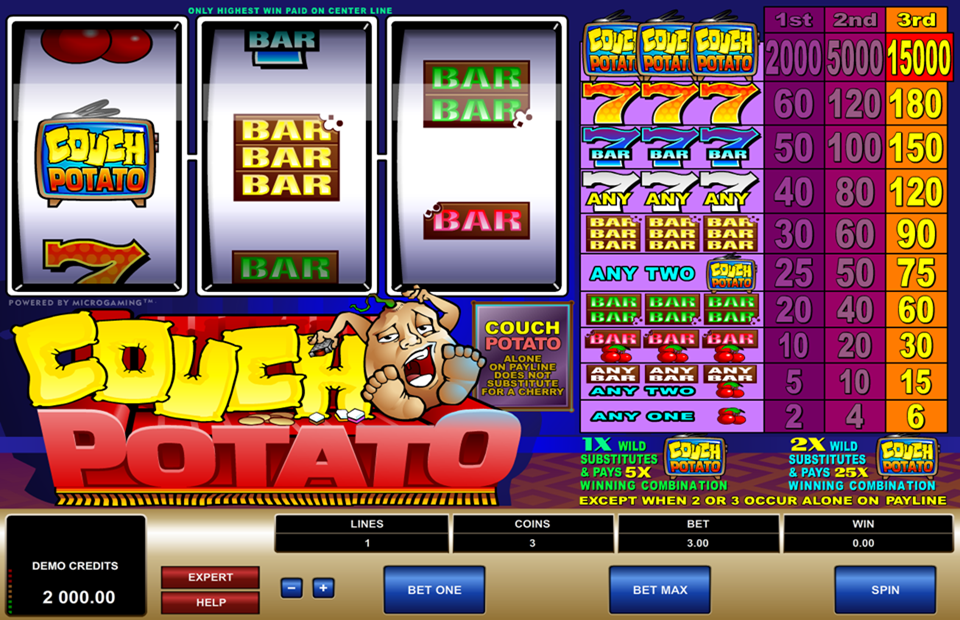 The Couch Potato slot consists of 3 reels, each of which only have 1 row. As a result, the entire game consists of only one payline which goes straight across the screen from left to right. The paytable showing how much each winning combination pays is located on the right side of the screen at all times, making it easily accessible for players. The number of coins per line is fixed at 1, and coin values range between 0.75 and 75. The Couch Potato symbol acts as a wild in the game, replacing all others in combination. Aside from this, the game does not have a multitude of other features that players may expect. There is no scatter symbol, and the jackpot is fixed at 15,000 instead of being progressive.

1. What kind of special features can you expect?
The most prominent feature of the game is the wild symbol. The game is otherwise very simple. It does not have a bonus game of any kind, or offer free spins at any point.
2. Are there any limitations when playing on a mobile device?
The game can be accessed through the web browser of mobile devices, and works seamlessly across Androids, iPhones and tablets. Nothing needs to be downloaded.
3. What is the RTP factor of Couch Potato?
The RTP of the game is 97.43, according to Microgaming.

Couch Potato is a great game for players who enjoy the simpler things in life, including a slot with a no-frills approach. The slot’s simple layout and straightforward paytable are both great features. Couch Potato does not have an autoplay option which allows players to step away from the slot and let it spin for itself. It does, however, have a free play mode which is available on the Microgaming website.

Play Couch Potato at the best Microgaming casinos online - reviewed and approved! Our recommendation is based on a wide range of aspects: they are accepting international customers, offer a broad range of payments for you, i.e. MasterCard, Bitcoin or Neteller, and provide plenty of games from Microgaming as well as other providers Thunderkick, BGaming or Lightning Box