Want to see how Pirate's Plenty works? Select a recommended casino site from the list below and start playing for free or real – our screenshots will give you a sneak peek! 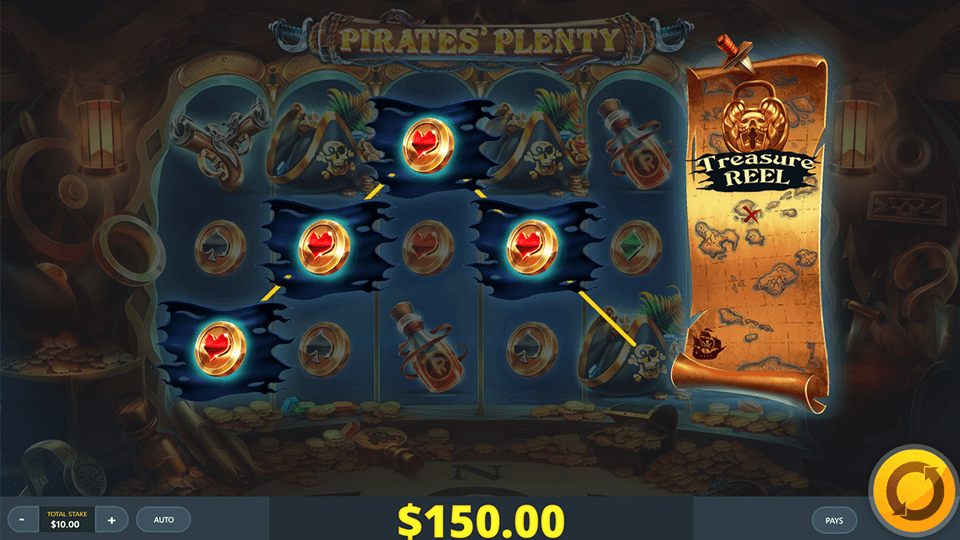 When talking about the gameplay, the main task would be the same as always – to line up 3 or more symbols of the same kind and receive a payout according to the paytable. As an addition to the main stage, the game comes with an interactive round packed with options designed to boost your bankroll.

The game offers a bit limited wagering opportunity, but you can place bets between €0.20 and €20 none of the less. This fact is important for players who plan their strategy meticulously and want to learn how to win before the reels actually start spinning.

While sailing the Seven Seas, you'll see the Map Symbols appear outside of the Ocean Spins. At the same time, the Treasure Reel is locked. Move the ship along with the treasure map with each new Map Symbol collect and once you have 50 of them, the Treasure Reel will open its gates. It remains unlocked for all future spins at the same stake.

Moreover, the unlocked Treasure Reel comes with Wild Ships. We talk about supersized Wilds that cover an entire reel. A few tips to score the Pirate’s Plenty Big Win: try to match them with Multipliers and receive 2x, 3x, or 5x your stake.

Once the Wild Monkey appears on the reels, it will remove all icons with a lower payout rating making room only for the better-paying ones. Also, the Wild Monkey takes place of the last removed symbol to help you re-trigger this Pirate’s Plenty Bonus feature.

Finally, this is a game you can play for fun or for real money. The only thing that differs the Pirate’s Plenty Free Play is all winnings are paid out in demo credits.

1. What kind of special features can you expect?
With 3 Ocean Spins icons placed anywhere on the reels, you will receive the 10 Pirate’s Plenty Free Spins. It would be hard to miss the 3 Sunken Treasure Chests standing at the top of the reels featuring their Ghostly Captain. Your task here will be to collect 3 keys and hopefully unlock one of those chests. Each fully unlocked chest turns 1+ lower-paying icons into Wilds also awarding additional extra spins.
2. Are there any limitations when playing on a mobile device?
There’s no need to download the iPhone app or the Android .apk file to play online.
3. What is the RTP factor of Pirate’s Plenty?
Pirate’s Plenty recension stays to the official RTP of 96.12% disclosed on the Red Tiger Gaming-powered sites.

With an evergreen background story and more than an attractive jackpot prize, this is a high volatile game recommended to players with significant gaming experience. Newbies will appreciate the newly-introduced options but will also need the help of the Pirate’s Plenty tips if plan to keep their heads above the water level.

Play Pirate’s Plenty at the best Red Tiger Gaming casinos online - reviewed and approved! Our recommendation is based on a wide range of aspects: they are accepting international customers, offer a broad range of payments for you, i.e. Bank Wire Transfer, Neteller or MasterCard, and provide plenty of games from Red Tiger Gaming as well as other providers Rabcat, Wazdan or Lightning Box