This is a slot for romantics! The 5 romance-themed reels and 3 rows of Microgaming’s Secret Admirer revolve are for players with a soft spot for candlelight dinners and moonlit nights. Find out more about this romantic video slot by reading our Secret Admirer slot review. We will offer an overview of the Secret Admirer bonus features and give readers our slot rating in the conclusion.

A screenshot is worth a thousand words, right? Here you go! But in the end, you have to try Secret Admirer yourself – one of the recommended casino sites should fit perfectly! 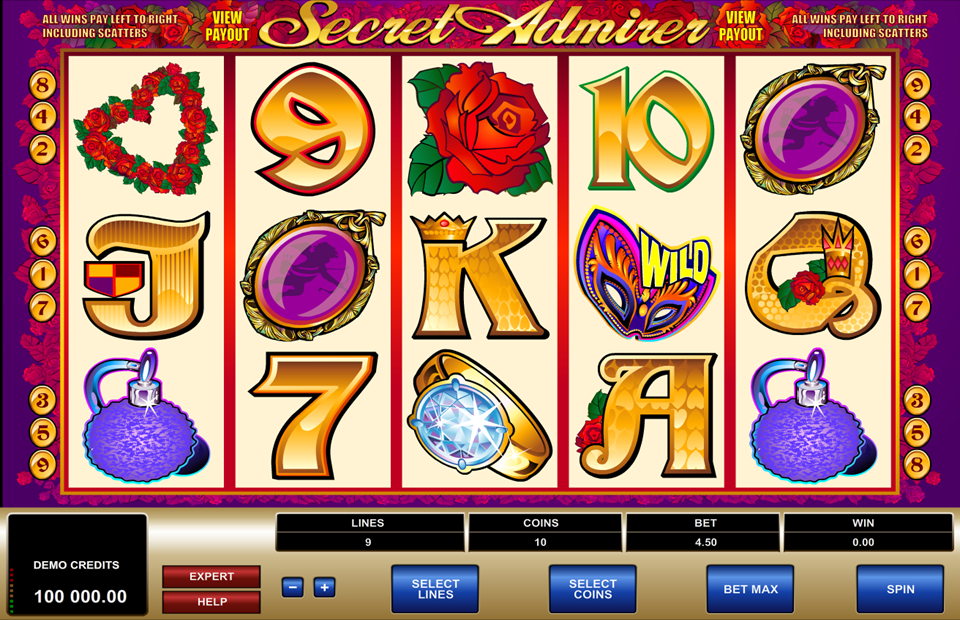 1. What kind of special features can you expect?
The sticky scatter feature during the Secret Admirer bonus free games are certainly a nice feature to increase your overall wins. Each time new scatter symbols appear during the free spins, you’ll be awarded with additional free spins.
2. Are there any limitations when playing on a mobile device?
Microgaming has not made a mobile app download version of their love-themed video slot. Instead, mobile players should play in the web browser of their iPhone or Android device.
3. What is the RTP factor of Secret Admirer?
Secret Admirer has an RTP factor of 96.08%.

Are you interested in enjoying the enchanting love-theme of Microgaming’s Secret Admirer slot? On a play-area of 5 reels and 3 rows, you’ll be able to chase after lucrative winning combinations and the coin prizes that come with them as well as after a great Secret Admirer free spins feature. Sure, the theme won’t be for everyone, but if you’re open to trying this slot, give it a few spins in the free play demo mode.

Play Secret Admirer at the best Microgaming casinos online - reviewed and approved! Our recommendation is based on a wide range of aspects: they are accepting international customers, offer a broad range of payments for you, i.e. Bitcoin, Neteller or MasterCard, and provide plenty of games from Microgaming as well as other providers Booming Games, 1x2 Gaming or Blueprint Gaming