Irene Adler, a woman from high society is reportedly missing, while her lover is the prime suspect. It looks like a perfect job for one of the most famous consulting detectives and a good chance to try Sherlock A Scandal in Bohemia, a steampunk-themed slot machine with 5 reels, 3 rows and 25 paylines produced by Tom Horn Gaming. With its 2 Bonus rounds including the Paparazzi Bonus and the Newspaper Bonus, Wilds, Scatters and Free Spins, this is a game with a nice earning potential. Read the Sherlock A Scandal in Bohemia slot review to learn the particulars.

Tired of reading? See the Sherlock A Scandal in Bohemia screenshots below and then claim one of the bonus offers of our recommended casinos to play for free or real!

Sherlock A Scandal in Bohemia screenshots 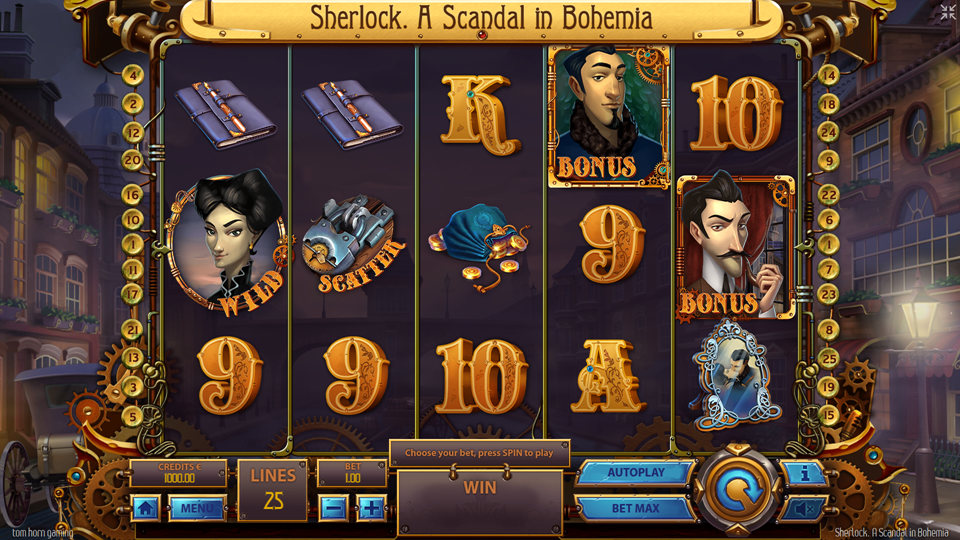 First of all, you should decide will you play for fun or wager for real money from the start. Newbies almost always op for the Sherlock A Scandal in Bohemia Free Play since it grants a nice amount of demo credits, so you can surely learn how to win and implement your own strategy at no extra cost.
The main goal is the same – collect 3 or more symbols of the same kind appearing from the leftmost on an active payline. The paytable is packed with themed symbols such as the Mirror, Book or Bag of Gold and Jewels, all with a higher payout rating and ability to produce a decent amount of coins. Lower-paying cards from Tens to Aces stand on the other side of the spectrum and pay significantly less. Irene acts as the Wild and you can use it to replace all other symbols, but those able to initiate the bonus rounds or award extra spins.
When 3 or more Sherlock or his main opponent icons appear anywhere on the reels, you’ll get to enjoy 1 out of 2 Sherlock A Scandal in Bohemia Bonus accordingly. The Newspaper Bonus lets you literally read the daily papers, where prospective winners have to guess under which question mark sign lies a pile of cash, including the big win of 500 coins. The Paparazzi Bonus is where you’ll win if a photographer never shows up. Your character will walk in a pyramid-shaped park with a total of 10 bushes where a treasure is hidden, so try to avoid publicity in order to collect a prize.

FAQ on Tom Horn Gaming Sherlock A Scandal in Bohemia

With its impressive graphics, captivating background story and overall atmosphere, this is a game we can recommend to players of all experience levels. Surely, most of them will appreciate the Sherlock A Scandal in Bohemia tips as a proven way to score the static jackpot prize.

Play Sherlock A Scandal in Bohemia at the best Tom Horn Gaming casinos online - reviewed and approved! Our recommendation is based on a wide range of aspects: they are accepting international customers, offer a broad range of payments for you, i.e. Neteller, MasterCard or Bitcoin, and provide plenty of games from Tom Horn Gaming as well as other providers Stakelogic, Leander Games or Red Rake Gaming