Based on the popular character from an English nursery rhyme, Humpty Dumpty is a 5-reel 3-row 30-payline video slot machine produced by 2 by 2 Gaming. This is a visually-appealing title that introduces a series of rewarding features, some of which turning the main game into 2 extra games. Your task would be to collect as many Wilds and Scatters as possible as they lead to the Humpty Dumpty Wild Feature, Freezing Wild Free Spins and the jackpot of 120.000 coins. Find out all important details and receive proven tips in the Humpty Dumpty slot review.

Tired of reading? See the Humpty Dumpty screenshots below and then claim one of the bonus offers of our recommended casinos to play for free or real! 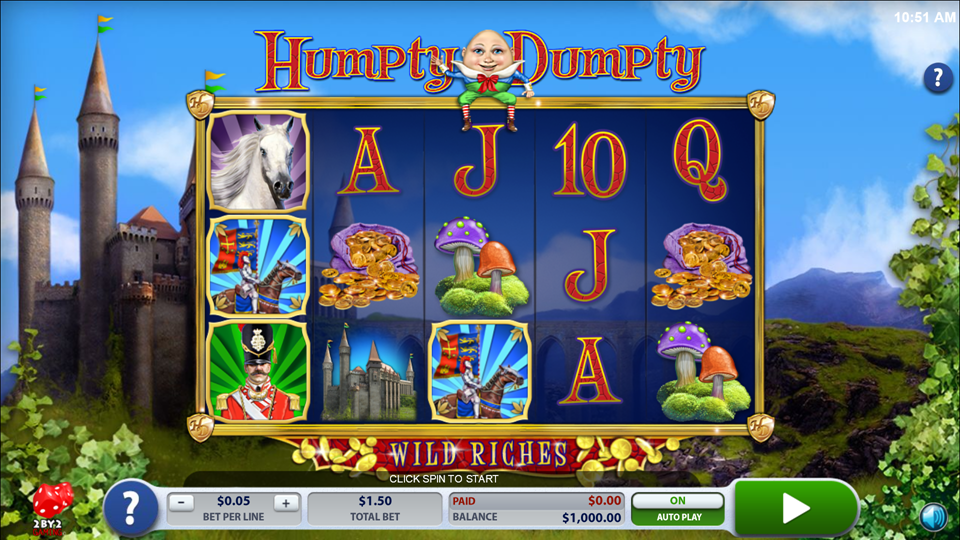 The provider made it possible to play for fun or for the real money, which is only up to you. It’s good to know there is the Humpty Dumpty free play mode enabled on all 2 by 2 Gaming-powered sites. There is a wide variety of betting combinations thanks to the adjustable coin value that goes from €0.01 to €10. Use your own strategy and wager between €0.30 and €300 per round to receive a number of coins according to the paytable. Speaking of which, it favors themed icons such as the Knight and Soldier that pay €20.000 and €10.000, respectively, presuming you managed to line up 5 of a kind. Every time the main character appears on the reel 3, it will explode to split it in 2 Wild Reels also transforming the game into a 6x3 base. This will last for as long as you keep winning. When the reel 3 becomes stack for Humpty Dumpty symbols, the game will introduce reel number 6 to improve your winning opportunities. Practically, more new icons will appear to create payouts along with those already on the base. Scatters can appear only on the reels 2, 3 and 4 during the base game and have the power to activate the Humpty Dumpty bonus. Moreover, the winners get to collect up to €300 for 3 Scatters no matter what.

FAQ on 2 By 2 Gaming Humpty Dumpty

1. What kind of special features can you expect?
Before the round starts, players can pick between “standard” free spins and the Humpty Dumpty free spins with 6x3 Freezing Reels. The second case scenario comes with 8 extra games with reels 3 and 4 frozen and little Humpty and Dumpty sitting on the top of them. When a Scatter appears, they will move closer to each other to award with 1 spin once they finally meet. The same goes for the first option, but it has 10 rounds and the appropriate number of steps leading to the additional spins.
2. Are there any limitations when playing on a mobile device?
Play online using any modern mobile device as there is no need to download the iPhone app or the Android .apk file for this purpose.
3. What is the RTP factor of Humpty Dumpty?
The RTP stands at 94.99%, according to the official info. You can use tips received in the Humpty Dumpty recension and try to beat the odds.

This is an interesting game well-worth your time and efforts, presuming you’re up to a challenge. Payouts are more than decent, but it takes some time to actually see the balance boosting. You can always try the Humpty Dumpty demo to see how it really works.

Play Humpty Dumpty at the best 2 By 2 Gaming casinos online - reviewed and approved! Our recommendation is based on a wide range of aspects: they are accepting international customers, offer a broad range of payments for you, i.e. MasterCard, Bank Wire Transfer or Neteller, and provide plenty of games from 2 By 2 Gaming as well as other providers Evoplay, Eyecon or 1x2 Gaming