Jack in a Pot is a medium to highly volatile Irish-themed video slot machine that utilizes Cluster Pays mechanics and brings a fresh breeze to the Red Tiger Gaming portfolio of challenging yet rewarding titles. Learn how to win the jackpot of 1743x the money invested after reading the Jack in a Pot slot review.

Unfortunatly, we have no free play mode for Jack in a Pot available. Check out the screenshots below and hop right into action with one of the recommended casino sites!

Jack in a Pot screenshots 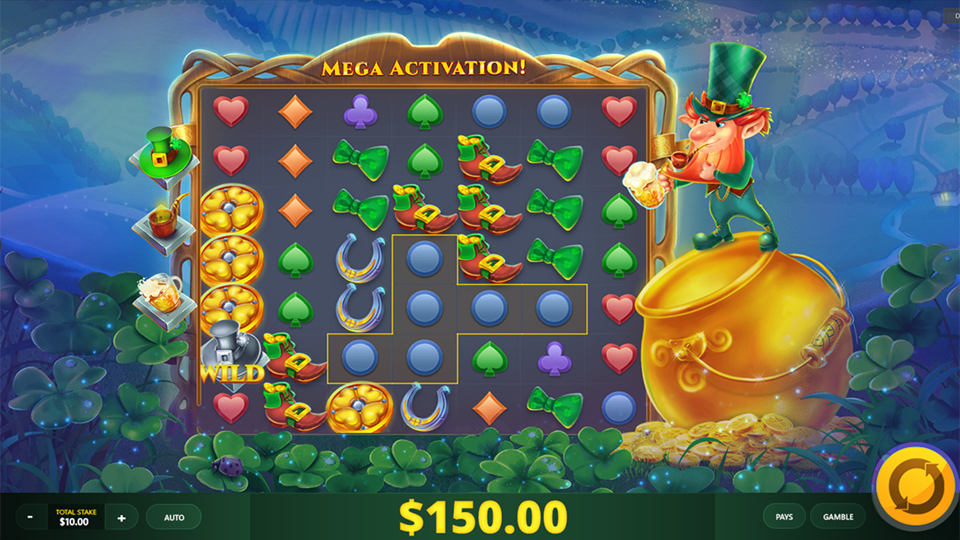 Featuring familiar symbols representing luck and good fortune as seen in the Celtic folklore, this is a game you can play for fun or for real. Depending on your betting strategy, invest between €0.20 and €40 per round.

To get paid, players should form a winning combination formed as a cluster of 5 or more adjacent items placed on a 7x7 setting. With the base full of the highest-paying items, winners will score the Jack in a Pot Big Win of 1743x their stake.

There are 4 types of Wilds and they all have a dual nature, Normally, they can substitute for any missing symbol from a potentially winning combination and improve the payline. Just remember that Clover Scatters are out of this story.

Each Wild icon has a distinctive Jack in a Pot Bonus feature, as follows. The Magic Pipe appeared in a cluster makes Jack blow the pie and turn 1 or more higher-paying icons expanding into Mega Tiles occupying 2x2, 3x3, or 4x4 space.

With the Beer Reels, Jack drinks his pint of beer and pour some on random reels. You will see them covered with identical icons and a chance to form bigger clusters.

The Rainbow Wild triggers the giant Rainbow Swaps feature that will swap random tiles for identical symbols, while the Hat Trick Wild lets Jack throw his hat in the air. At the same time, all lower-paying items are removed from the reels.

Golden 4-Leaf Clover is a symbol with the highest rating and pays up to 300 coins for a cluster of 40+ matching icons. Lucky Boot is the second-best choice granting a maximum of 250 coins followed by the Horseshoe that pays 100 coins at its peak.

Symbols representing suits of traditional playing cards pay up to 35 coins when forming a cluster of 5 to 40+ items. The same works in the Jack in a Pot Free Play mode where all winnings are calculated in demo credits.

FAQ on Red Tiger Gaming Jack in a Pot

1. What kind of special features can you expect?
When all 4 leaves of Clover are collected in a single hand, lucky winners will receive a random number of Jack in a Pot Free Spins. Thanks to the Feature Frenzy, all Wilds collected during this round will activate the appropriate Wild Features one after the other.
2. Are there any limitations when playing on a mobile device?
There’s no need to download the iPhone app or the Android .apk file to play online.
3. What is the RTP factor of Jack in a Pot?
Jack in a Pot recension stays to the official RTP of 96.06% disclosed on the Red Tiger Gaming-powered sites.

This is a nice game to pass your time and score a massive amount of cash, presuming the Lady Luck stays behind you. Given the ROI percentage, a smart move would be to stick close to the Jack in a Pot tips.

Play Jack in a Pot at the best Red Tiger Gaming casinos online - reviewed and approved! Our recommendation is based on a wide range of aspects: they are accepting international customers, offer a broad range of payments for you, i.e. MasterCard, Bank Wire Transfer or Bitcoin, and provide plenty of games from Red Tiger Gaming as well as other providers Booming Games, Blueprint Gaming or Wazdan