Inspired by one of the most successful globally-acclaimed TV shows and perfectly scheduled for the evening before the Season 5 finale, Vikings is a 5-reel 3-row 243-payline video slot game produced in cooperation of NetEnt and A+E Networks. Featuring all popular faces that fans enjoyed seeing on their quests, the game combines Hot Spots Scatter Pays, Shield Wall, Raid Spins and Raid Spins that may bring up to 200000 coins. Eager to join this action-packed medieval adventure? Read the Vikings slot review and learn how to win.

We have no free play mode available yet, but take a look at the Vikings screenshots instead. Or why not simply giving a try with one of the recommended casino sites above? 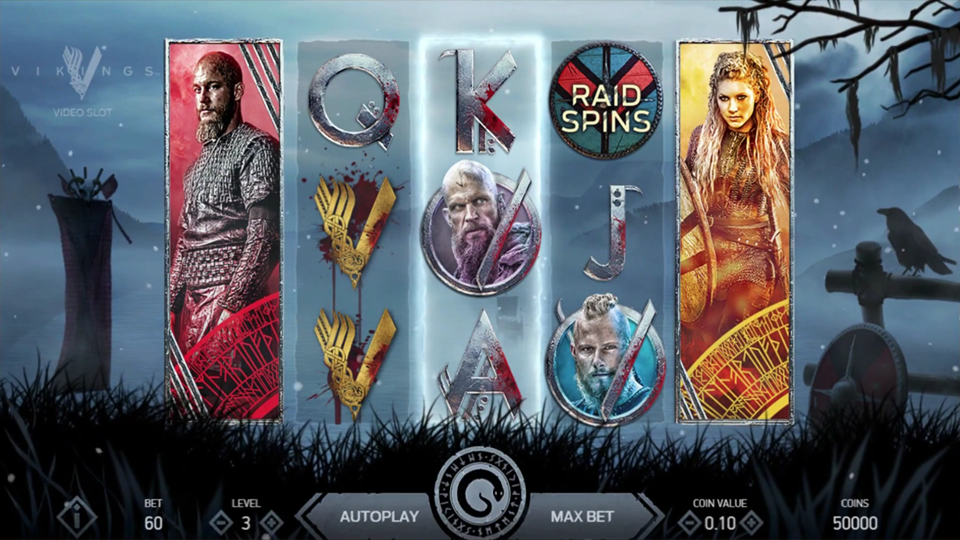 Speaking of the gameplay, this is a title with classic settings where is needed to collect 3 to 7 of the same kind in order to get paid, but you’ll also see some innovations closely described below. You can play for fun and learn how to win by implementing a specific betting strategy. Both Vikings Free Play and real money modes have the same coin denomination between €0.01 and €0.05, which makes it possible to wager between €0.20 and €100 per round across 1-10 levels.
The show’s main protagonists Ragnar Lothbrok, Lagertha, Bjorn and Floki are symbols with the highest rating and may appear as Colossal Symbols occupying the entire reel. Naturally, they also dominate the paytable and bring 6 to 28 coins for combinations of 3 to 7 of a kind. Icons closely related to Vikings’ legends and lifestyle are worth more than playing cards from Tens to Ace, also designed to match the overall experience.
During the base game, the Hotspot may cover the entire reel and transform the neighboring icons into the appropriate Viking should any of the highest-paying symbols lands on this spot. When the Hotspot Feature is activated, both single and stacked Viking symbols may appear on the reels.
At a random occasion in both main course and the Viking Bonus rounds, the Shield Wall feature may come out of the shadow. You’ll get a cluster of Mystery Symbols that may significantly improve your winning odds.

1. What kind of special features can you expect?
When 3+ Raid Spins icons appear on the reels 3, 4 or 5, you get to enjoy the 7 Vikings free spins played on a brand new setting with 7 reels, 5 rows, and 78125 betways and with 3 Hotspots. Moreover, when a fully-stacked Viking symbol lands on the Hotspot, lucky winners will receive a jackpot prize between 6 and 200.000 coins. The later is only possible with the entire screen or 27 symbols of the same kind appeared simultaneously.
2. Are there any limitations when playing on a mobile device?
Play online on NetEnt-powered sites using any modern mobile device since there is no need to download the iPhone app or the Android .apk file for this purpose.
3. What is the RTP factor of Vikings?
According to the official info, the RTP stands at 96.05%, which is approved in our Vikings tutorial.

After reading the Vikings recension, it’s pretty much clear that we will have a huge hit, especially among fans that appreciate the TV show. The only thing to cope with would be the house edge, but you can at least use our tips and try the demo forgetting about any potential obstacle.

Play Vikings at the best NetEnt casinos online - reviewed and approved! Our recommendation is based on a wide range of aspects: they are accepting international customers, offer a broad range of payments for you, i.e. Neteller, Bank Wire Transfer or Visa, and provide plenty of games from NetEnt as well as other providers Red Rake Gaming, Rabcat or Booming Games