Taking you deep beneath the ground and even deeper inside the ancient pyramid, Book of Secrets is the Ancient Egypt-mythology themed video slot machine produced by Synot Games. With the company’s standard 5 reels and 3 rows, prospective winners will have only 10 fixed paylines, which makes the task even more challenging.
Speaking of which and given the number of reels, your main task will be to collect 3 or more symbols of the same kind placed on adjacent paylines from the leftmost. Looking like Indiana Jones’ nephew, the game’s beautiful main protagonist will probably have the highest payout rating and will get a decent number of coins, along with other themed icons. Naturally, an excerpt from a 52-deck of cards will pay significantly lower.
The game will feature Expanding Symbols, so we just have to wait a few more days to see will a random icon get the honor, or some specific items will expand and cover the entire reel to help you form more winning combinations. The best case scenario would be to have Wilds as Expanding Symbols as this is surely a shortcut to the Book of Secrets Bonus prize.
At this early stage, one thing we know for sure: a number of Scatters – presumably 3 at least – will activate the Book of Secrets Free Spins. Oh, one more thing which is based on the official info: the RTP will stand between 88.00% and 98.00%. For all other details, including the coin denomination and proved betting strategy, you’ll just have to wait for the game to be launched officially. In the meantime, try other titles produced by Synot Games or read our other tutorials.

We have no free play mode available yet, but take a look at the Book of Secrets screenshots instead. Or why not simply giving a try with one of the recommended casino sites above? 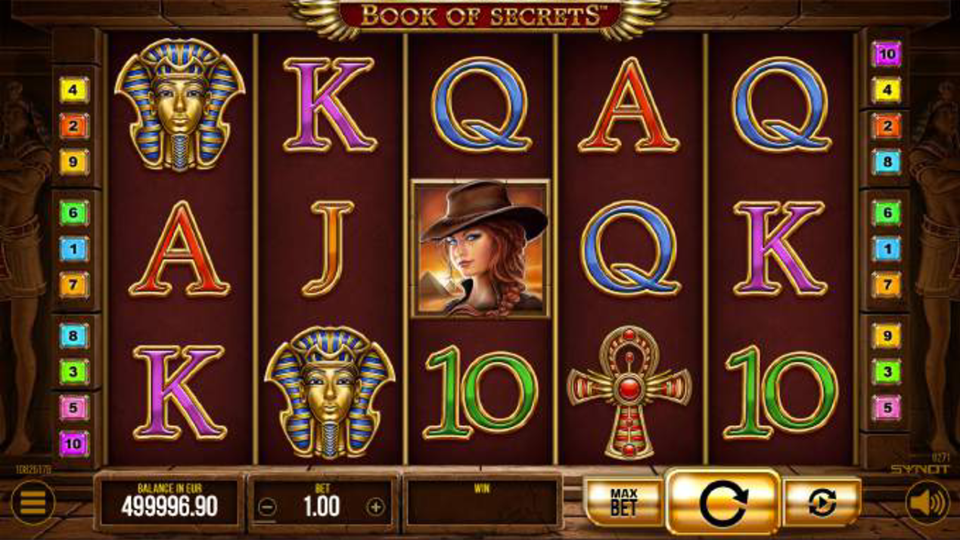 Play Book of Secrets at the best Synot Games casinos online - reviewed and approved! Our recommendation is based on a wide range of aspects: they are accepting international customers, offer a broad range of payments for you, i.e. Neteller, MasterCard or Bitcoin, and provide plenty of games from Synot Games as well as other providers Quickspin, Blueprint Gaming or Booming Games