Featuring 5 unique Primus Mystery Awards, Enter the Arena Battle Bonus, Free Spins, and Multipliers, Game of Gladiators takes you to the deadly arena where mighty warriors fight for their lives and eternal glory. Play’n Go equipped this title with its standard 5-reel 4-row setting and 20 fixed paylines granting the Big Win of 10.000 coins. Interested to experience a day in the gladiator’s life? Read the Game of Gladiators slot review.

We have no free play mode available yet, but take a look at the Game of Gladiators screenshots instead. Or why not simply giving a try with one of the recommended casino sites above? 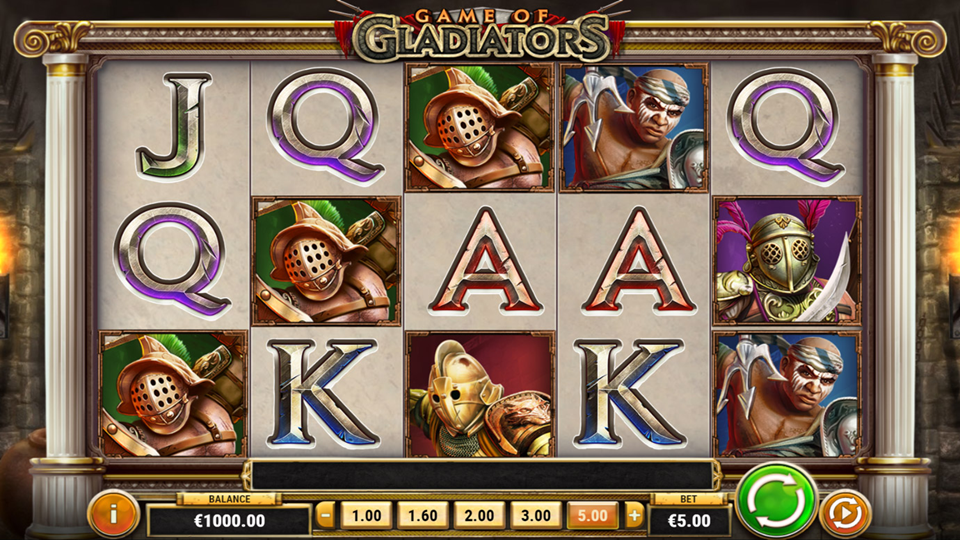 The paytable favors themed icons, so you'll earn more coins when Rectiarius, Murmilio, Provocator, Scissor or Tiger appear than it would be in the scenario with playing cards from Jacks to Aces.

Symbols with a higher payout rating bring between 20 and 400 coins for combinations of 3 to 5 of a kind, while the same number of lower-rated pay 5 to 50 coins during the base game.

As a random occasion during the main game, players may improve their bankroll with 1 out 5 Primus Mystery features: Fame selects a Gladiator and awards the prize according to the Battle Prize paytable, Spear Attack adds 3 to 6 Random Wilds, Sword Attack duplicates the first reel 2 to 4 times, Net Attack holds all matching Gladiators for 1 re-spin, while Enraged grants 2 full Expanded Wilds.

Thanks to the Net Attack, it is possible to have a virtually unlimited number of the Game of Gladiators Free Spins, presuming the gods favor your fighter. The same goes for extra spins in the bonus game.

Since your Champion initiates the attack as explained below, each new Scatter comes with a 2x Multiplier and free spins will continue endlessly until the battle is won or lost.

Finally, the same set of rules is applied in the Game of Gladiators Free Play mode. Also, before deciding will you play for fun or for real money, set the coin value between €0.01 and €5, which makes it possible to wager from as low as €0.20 all the way up to €100 per round.

1. What kind of special features can you expect?
When 3 Scatters land on the reels, you will activate the Game of Gladiators Bonus. Before the Enter the Arena Battle Bonus starts, players must select a Champion to replace the base game Scatter. This is an important decision since each Champion comes with a different Victory Prize. For example, Amazonia the Female Champion pays 20x to 100x the money invested, while Spartacus triggers the extra spins. When all opponents are defeated, the game ends and you collect the prize.
2. Are there any limitations when playing on a mobile device?
You can play online on supported Play’n GO sites using a mobile browser. There is no need to download the iPhone app or the Android .apk file.
3. What is the RTP factor of Game of Gladiators?
According to the official info, the default RTP stands at 96.42%, so our Game of Gladiators recension sticks to that figure.

Action-packed and nicely-animated, this is an interesting title that brings a deeper insight on warriors once entertained the Eternal City of Rome. It’s suitable for players of all experience levels that will hopefully benefit from the Game of Gladiators tips assembled in this recension.

Play Game of Gladiators at the best Play’n Go casinos online - reviewed and approved! Our recommendation is based on a wide range of aspects: they are accepting international customers, offer a broad range of payments for you, i.e. MasterCard, Neteller or Bitcoin, and provide plenty of games from Play’n Go as well as other providers Thunderkick, Red Rake Gaming or 1x2 Gaming