Inspired by the true story of legendary French heroine that led her people in decisive battles for freedom, Joan Of Arc is a themed slot machine released in autumn 2018 by GameArt. Sending you on an epic journey across 5 reels, 3 rows and 243 paylines, the game introduces revolutionary Expand and Split feature standing side by side with traditional tools such as Wilds, Scatters and Free Spins. Win the Bonus game and boost your bankroll with 5.000 coins, but first, take a few moments of your time to read the Joan Of Arc slot review.

We have no free play mode available yet, but take a look at the Joan Of Arc screenshots instead. Or why not simply giving a try with one of the recommended casino sites above? 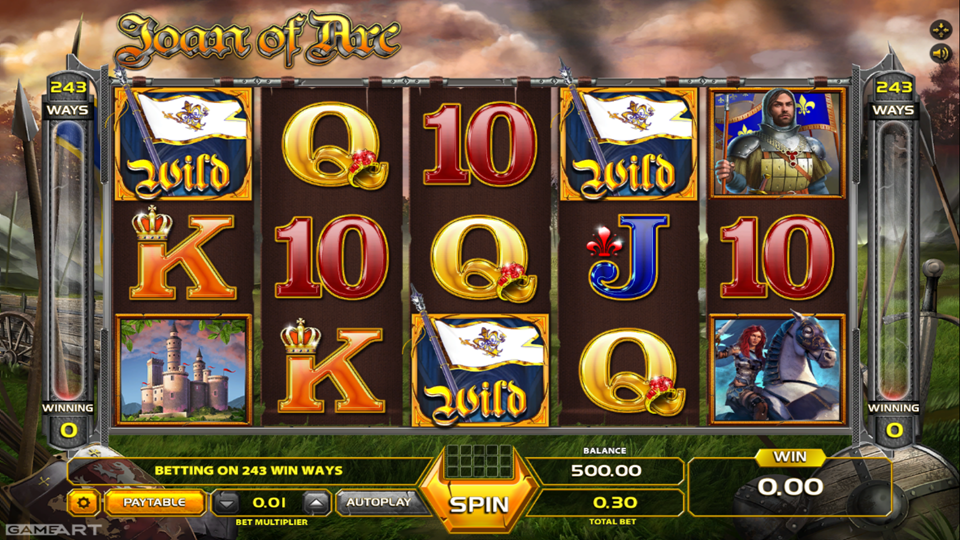 Naturally, before entering the battle, players can choose will they play for fun or for the real money, as both modes are available by default. This made it possible for each gamer to work on his betting strategy and later stick to the solution. To get paid, prospective winners must combine 3 or more icons of the same kind placed on adjacent reels from the leftmost.

The paytable regards themed icons highly, so you’ll receive between 50 and 1.000 coins for 3-5 icons of the game’s main protagonist. Moreover, her sworn enemy that leads the invading army will bring 25 to 500 coins for the same number of items collected, presuming they appear on an active payline.

You can always use Wilds to replace a missing item and form a winning combination that will be multiplied 2x. The only items that can’t be replaced this way are Scatters and they are used to activate the Joan Of Arc bonus game. Since the coin value ranges from €0.01 to €1, players can wager between €0.25 and €25 per round. If your bankroll allows this option, use the Autoplay button to set the reels spinning for a predefined number of times.

FAQ on GameArt Joan Of Arc

1. What kind of special features can you expect?
Collect 3 or more Scatters appearing anywhere on the reels to receive 10 re-triggerable Joan Of Arc free spins. This is only the part of the deal since the same moment you’ll trigger the Expand and Split feature. Practically, all symbols will be separated and replaced with arrow borders and you’ll get to choose the side to lead to the attack or to defend the castle. Symbols of the same kind will eliminate each other and make room for other high-paying icons to land on the reels.
2. Are there any limitations when playing on a mobile device?
You can play online on GameArt-powered sites using any mobile device as there is no need to download the iPhone app or the Android .apk file.
3. What is the RTP factor of Joan Of Arc?
The RTP official info is still to be released by the publisher. We will add it to the Joan of Arc recension in a timely manner.

We had the opportunity to test one of the most anticipated games of the gaming season 2018 and our final verdict is that it was worth waiting. Announced a few years ago as up and coming title that will bring a set of innovative features, the game lived up all expectations. Even though the house has a considerable advantage, you can try the Joan Of Arc free play and see do you have what it takes to fight along one of the greatest heroes in history.

Play Joan Of Arc at the best GameArt casinos online - reviewed and approved! Our recommendation is based on a wide range of aspects: they are accepting international customers, offer a broad range of payments for you, i.e. Bank Wire Transfer, MasterCard or Bitcoin, and provide plenty of games from GameArt as well as other providers BGaming, 1x2 Gaming or Booming Games