In the Red Tiger Gaming video slot Reel King Mega you are accompanied by up to five different Reel Kings, who can reward you with bonus features, potentially leading to royal winnings. Give the game a try in free play mode or, alternatively, read our Reel King Mega slot review first, to gather infos about the game, that will help you developing a strategy.

Unfortunatly, we have no free play mode for Reel King Mega available. Check out the screenshots below and hop right into action with one of the recommended casino sites! 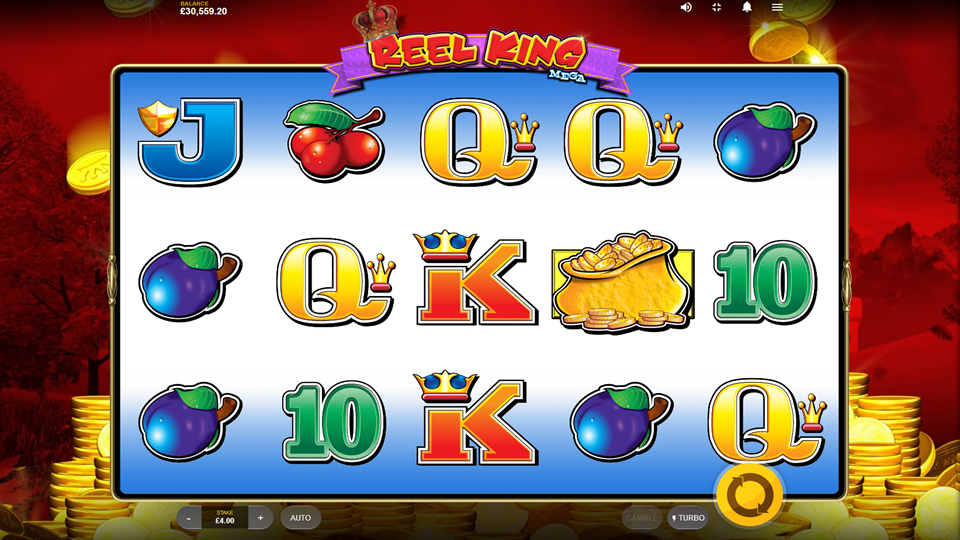 The Reel King Mega slot consists of 3 rows and 5 reels, that include 20 paylines. You need to bet at least £0.20 and up to £200 per spin. The king and queen serve as high paying symbols and are added up with fruit and letters. Other symbols like fruits or letters pay a little lower. Additionally, all symbols have a chance to appear as super symbols, which means that they stretch over 2x2 fields.

Sometimes the King’s Crown randomly appears after your spin and swaps standard symbols for wilds. Moreover, there is another bonus feature, namely the Reel King feature, that is triggered by one of the Reel Kings. There are five different Reel Kings, who have a special set of reels each and pay out differently.

1. What kind of special features can you expect?
The Reel King feature gives you the possibility to score additional winnings. Because there are five different Reel Kings, who can trigger this function, with a little luck this function can be triggered a few times in a row. Additionally, each Reel King continues to spin after a hit, until a losing combination occurs.
2. Are there any limitations when playing on a mobile device?
There are no restrictions, if you want to play Reel King Mega from you mobile device – no matter if you use an iPhone or Android device. No further download of an apk or app is needed.
3. What is the RTP factor of Reel King Mega?
According to Red Tiger Gaming, the Reel King Mega RTP factor lies at 96.00%.

Offering a unique bonus feature, namely the Reel King feature, the slot is fun to play and provides an appealing gameplay. If you want to play for fun or bet some real money, you can play Reel King Mega in one of our recommended casinos.

Play Reel King Mega at the best Red Tiger Gaming casinos online - reviewed and approved! Our recommendation is based on a wide range of aspects: they are accepting international customers, offer a broad range of payments for you, i.e. MasterCard, Neteller or Bitcoin, and provide plenty of games from Red Tiger Gaming as well as other providers Blueprint Gaming, Playson or Evoplay