The protagonist of this Habanero Systems slot is the tiny, blue hedgehog that goes by the name of Roger. Find out what the rolling mammal does once it goes wild by checking out our Rolling Roger slot review. The Rolling Pays feature is not all this entire progressive slot has to offer, though. Take an aim at scoring the several critters and line them up on the 5 reels and 3 rows of Rolling Roger.

Want to see how Rolling Roger works? Select a recommended casino site from the list below and start playing for free or real – our screenshots will give you a sneak peek! 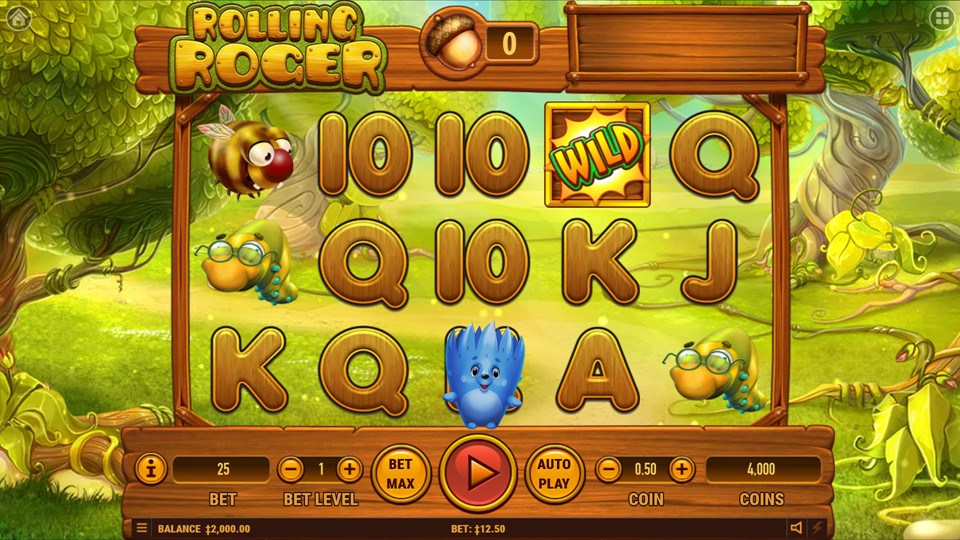 While 6 collected snail symbols pay well with its 2.500 coin prize, the Wild symbol pays the jackpot of 5.000 coins. Before you step out into this magical forest filled with magic critters, make sure to set your desired betting amount by choosing between 1 – 10 coins and allot a value between 0.01 and 20 per spin. The number of Rolling Roger pay-lines is fixed at 25. In the Rolling Roger bonus feature, your aim will be to collect several symbols. Once Roger rolls over them, they count as collected and each collected symbol increases your hazelnut count by +1. These can be redeemed during the Rolling Roger free spins feature, which is being triggered by 3 or more scatter symbols. So, always make sure you have enough Hazelnuts in your pocket, as they might sweeten the deal during your free play Rolling Roger bonus games.

1. What kind of special features can you expect?
The most distinct feature of this Habanero Systems’-powered slot is the hedgehog, which, by rolling a total of 3 – 15 positions, will collect symbols and trigger an up to x6 multiplier in the process.
2. Are there any limitations when playing on a mobile device?
Both Android and iOS users can enjoy this progressive slot on the go. The mobile web version is the way to go, as there is no download available.
3. What is the RTP factor of Rolling Roger?
The RTP of this is set at 96.67 %.

Collect symbols and benefit from the lucrative multipliers in the process. During the Rolling Roger free spins feature, each letter and number will transform into a Wild symbol. Our affirmative rating in this Rolling Roger slot review is certain: the creativity of both the gameplay experience and the game theme are noteworthy.

Play Rolling Roger at the best Habanero casinos online - reviewed and approved! Our recommendation is based on a wide range of aspects: they are accepting international customers, offer a broad range of payments for you, i.e. MasterCard, Neteller or Bitcoin, and provide plenty of games from Habanero as well as other providers Evoplay, Lightning Box or BGaming