Spirits of Zen is a 5-reel 3-row video slot machine launched in February 2019 as a joint project of Leander Games and Meta GU that takes you to the world of Manga introducing Hidden Wilds, Instant Reel Re-spins and Cascading Free Spins. Moreover, there are 243 ways to score a big win with increasing multipliers Heli Flipper, Reel Shunt, and Wild Hopper. Care to find out more details? Read the Spirits of Zen slot review.

Unfortunatly, we have no free play mode for Spirits of Zen available. Check out the screenshots below and hop right into action with one of the recommended casino sites! 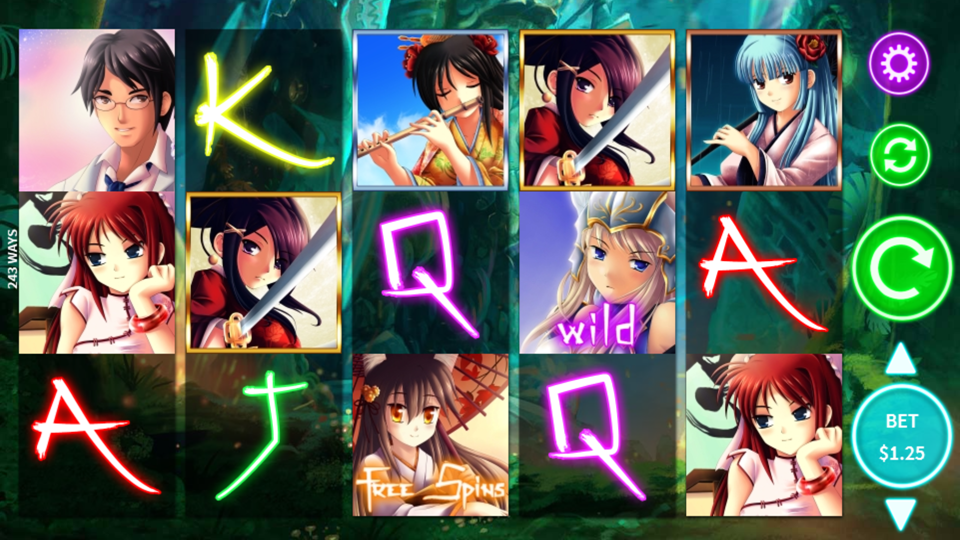 Before entering the Zen garden to transform it into an action-packed field, players must define will they play for fun or for cash. In any case, you have to line up 3 or more icons of the same kind placed from the leftmost on adjacent reels in order to get paid.
Naturally, the paytable favors Manga comic-themed symbols and puts much trust in their payout rating, so the lucky winners will receive 1.60 to 16 coins for combinations of 3 to 5 Warriors appeared on an active payline. Flute player, students and other hand-drawn characters will boost your bankroll between 0.40 and 8x. On the other side, lower-paying items are represented with a standard deck of cards from Jacks to Aces and pay a maximum of 1.20 coins.
The coin value ranges between €0.01 and €25, so you can wager between €0.25 and €250 per round. Set up your own betting strategy while the Spirits of Zen Free Play mode is turned on, so you can learn how to win without any real money investment. Naturally, the coin denomination remains the same when you wager for cash.
After any spin, no matter of its actual outcome, you can trigger 1 out of 3 Spirits of Zen Bonus features: Wild Hopper jumps on the reels adding 1 Wild icon instead of an existing lower-paying symbol, Heli Flipper flies around the reels and flips symbols to reveal more winning combinations, while Reel Shunt awards 1 re-spin bringing a brand new set of icons of the reels.

1. What kind of special features can you expect?
When 3, 4 or 5 Scatters appear anywhere on the reels, you will receive 10, 15 or 30 Spirits of Zen Free Spins, respectively. Each time you score a winning combination, you will be rewarded with 1 re-spin, while the Multipliers can grow up to 5x for 5 wins in a row. Remember the Multiplier will reset to 1x after the first non-winning round.
2. Are there any limitations when playing on a mobile device?
You can play online using any mobile device on various Leander Games’ sites because there is no need to download the iPhone app or the Android .apk file.
3. What is the RTP factor of Spirits of Zen?
The RTP stands at 95.52%, according to the official info. The Spirits of Zen tutorial also sticks to this fact.

This is a game that transforms a calm garden into a coin-packed field with many prizes to be scored. Rewarding as it is, the game will suit more experienced players as the house edge is a bit higher than a novice gamer could expect. Still, we recommend you try the Spirits of Zen tips and see will they lead you to the jackpot prize.

Play Spirits of Zen at the best Leander Games casinos online - reviewed and approved! Our recommendation is based on a wide range of aspects: they are accepting international customers, offer a broad range of payments for you, i.e. Bitcoin, MasterCard or Neteller, and provide plenty of games from Leander Games as well as other providers Playson, Blueprint Gaming or Red Rake Gaming