Taking you to medieval England, Battle Royal is a history-themed slot machine with 5 reels, 3 rows, and 20 fixed paylines. With its humorous twist, the game focuses on King Henry VIII and his infamous 6 queens adding tons of interactive features such as Long Live the King, Wilds, Coat of Arms Scatter, and Free Spins finally leading to the big win of €500.000 or 5000 coins. All fans of Play’n GO looking for an action-packed title with hand-drawn graphics and high prizes should definitely read the Battle Royal slot review and learn more.

We have no free play mode available yet, but take a look at the Battle Royal screenshots instead. Or why not simply giving a try with one of the recommended casino sites above? 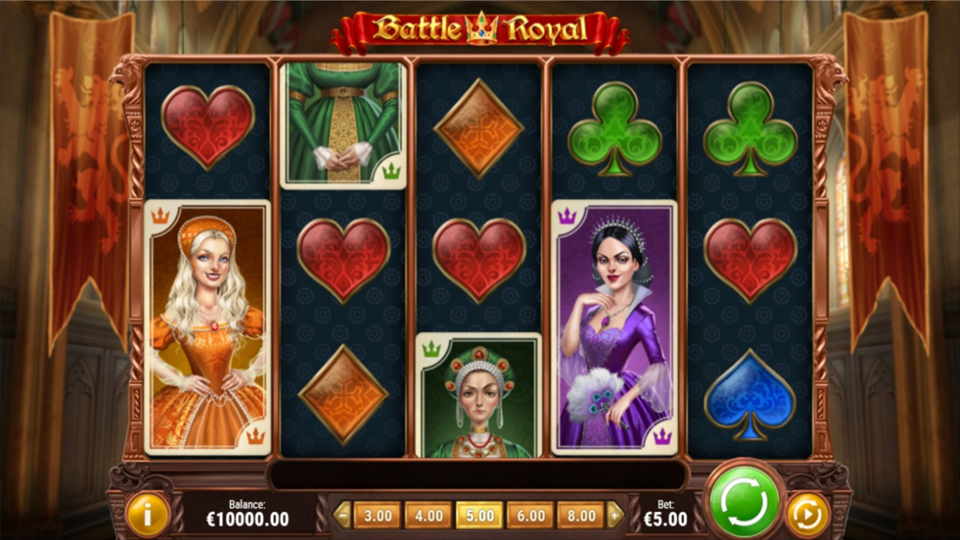 First of all, you should define will you play for fun or for real money. The Battle Royal Free Play grants a large number of demo credits, so you can use them and learn how to win without making an additional investment.
The coin value ranges from €0.01 to €5, which makes it possible to set up your own betting strategy and wager between €0.20 and €100 per round, according to your experience as well.
Naturally, the paytable is crowded with themed icons where the game’s main protagonists have the highest payout rating. King Henry works as the Wild and pays up to 30x your stake, while his 6 wives bring between 0.5x and 30x for combinations of 3 to 5 of a kind. Remember that Wild can’t work instead of the Scatter, which is needed to activate the Battle Royal bonus, but may turn a Beheaded Wives into Wilds during the extra spins.
On the other side, you’ll see a standard collection of playing card suits that pay up to 3x. During the base game, the Royal Flush feature may come upon a random occasion and turn all lower-paying symbols into the same symbol.

1. What kind of special features can you expect?
When the Scatter lands on the reels 1 and 5, you’ll get to pick between 2 rewarding features: the Battle Royal Free Spins or the Long Live the King feature. The first case scenario gets you to choose which queen will survive the guillotine while watching it sacks another reel with each new spin. If at least 1 wife survives, lucky winners will collect a big win. The other bonus round puts you as the King’s accolade with a task to help the crowned head escape from the dungeon guarded by ghosts of jilted wives and eventually earn Mystery Multipliers applied to the overall score.
2. Are there any limitations when playing on a mobile device?
You can play online on supported Play’n GO sites using a mobile browser only because there is no need to download the iPhone app or the Android .apk file.
3. What is the RTP factor of Battle Royal?
According to the official info, the RTP stands at 96.56%, so our Battle Royal recension sticks to that figure.

This is a highly-volatile game where you literally have to keep the head on the shoulders while trying to collect the static jackpot prize. Use the Battle Royal tips as your best friends on this memorable trip back in time and try to beat the house that has the starting advantage. With all being said, we can recommend this game both to newbies and more experienced players.

Play Battle Royal at the best Play’n Go casinos online - reviewed and approved! Our recommendation is based on a wide range of aspects: they are accepting international customers, offer a broad range of payments for you, i.e. MasterCard, Bitcoin or Neteller, and provide plenty of games from Play’n Go as well as other providers Wazdan, Lightning Box or Eyecon