In the progressive 5-reel 3-row slot Dragon’s Throne by Habanero Systems, two dragons go at it in the fighting pit. Play online and defeat the other dragons by hitting as many winning combinations as possible. Read more about this in our Dragon’s Throne slot review and get a comprehensive rating as well as tips, other features and learn how to win.

Unfortunatly, we have no free play mode for Dragon´s Throne available. Check out the screenshots below and hop right into action with one of the recommended casino sites! 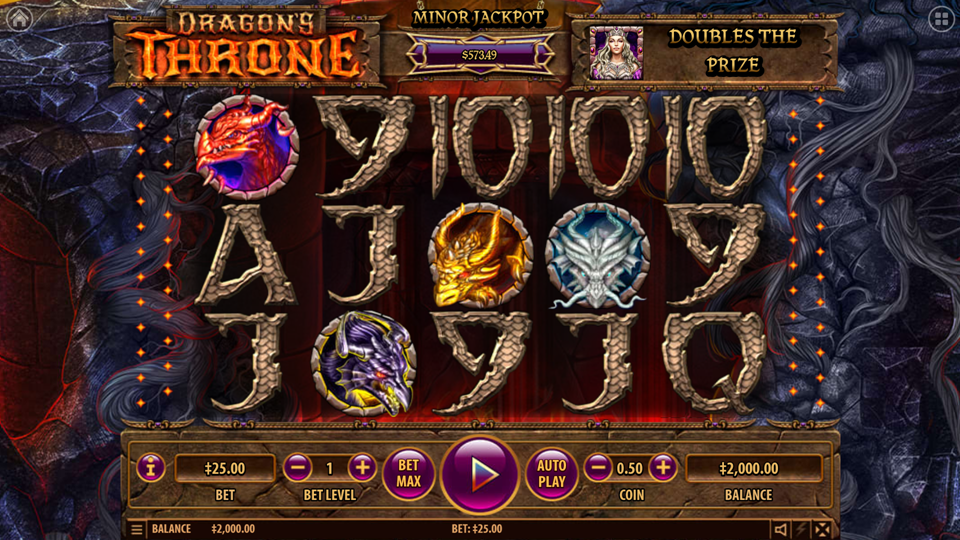 Five different Dragons and one Princess are key in this slot. The various symbols pay from left to right, as can be seen on the paytable. While the number of paylines is fixed at 50, you can choose from a total of 1–10 coins and a coin value between €0.01 and €10. The Princess wild symbols may appear on reels 2, 3, 4 and 5 and replaces all other icons except the one-eyed Dragon. Each winning combination which includes the Princess will be doubled. The one-eyed Dragon, which only appears on the centre reel if any of the four dragons appear centred on reel 1, triggers the dragon fight feature if the dragon on reel 1 pops up on reel 5 as well. During this feature, all spins are Dragon’s Throne free spins and two animated dragons appear on the screen. The dragon on the right will be fighting for the winners, while the opposing dragon fights against. This bonus feature ends when either all four dragons are defeated, or your own dragon has lost all its health points.

1. What kind of special features can you expect?
The dragon fight adds some kind of role-playing feel to the slot. If this Dragon’s Throne bonus game is triggered, every subsequent winning spin removes health points from the opponent dragon, whereas every non-winning spin removes health points from the player’s dragon. A total of 4 dragons are to be defeated. The multiplier can go up to 3x in the final fighting round.
2. Are there any limitations when playing on a mobile device?
The mobile version (Android and iPhone) offers all the features of the desktop version of the Dragon’s Throne slot with no need to download an app. Play for fun if you prefer not to bet real money.
3. What is the RTP factor of Dragon´s Throne?
The RTP factor of the Dragon’s Throne by Habanero Systems is officially at 96.04%. The free play demo may serve to fine-tune your strategy.

In summary of the Dragon’s Throne tutorial, the animated dragon fight feature is quite something. The total bet may be multiplied by 2 should the player manage to defeat all four dragons in this unusual bonus feature. Apart from that, the Princess wild is multiplying your winning combinations as well.

Play Dragon´s Throne at the best Habanero casinos online - reviewed and approved! Our recommendation is based on a wide range of aspects: they are accepting international customers, offer a broad range of payments for you, i.e. Neteller, MasterCard or Bitcoin, and provide plenty of games from Habanero as well as other providers NetEnt, iSoftBet or Big Time Gaming