Taking you to the journey to the center of Earth, Gemtastic is January 2019 release by Red Tiger Gaming built on a challenging layout with 6 reels, 5 rows, and 30 fixed paylines. With a simple task to collect as many shiny gems as possible, the game comes with a few interesting features including Mega Gems, Magic Glow, and Lava Multiplier. Moreover, prospective winners will surely appreciate the fact that the main jackpot counts no less than 10.000 coins. Find out more details in the Gemtastic slot review.

Want to see how Gemtastic works? Select a recommended casino site from the list below and start playing for free or real – our screenshots will give you a sneak peek! 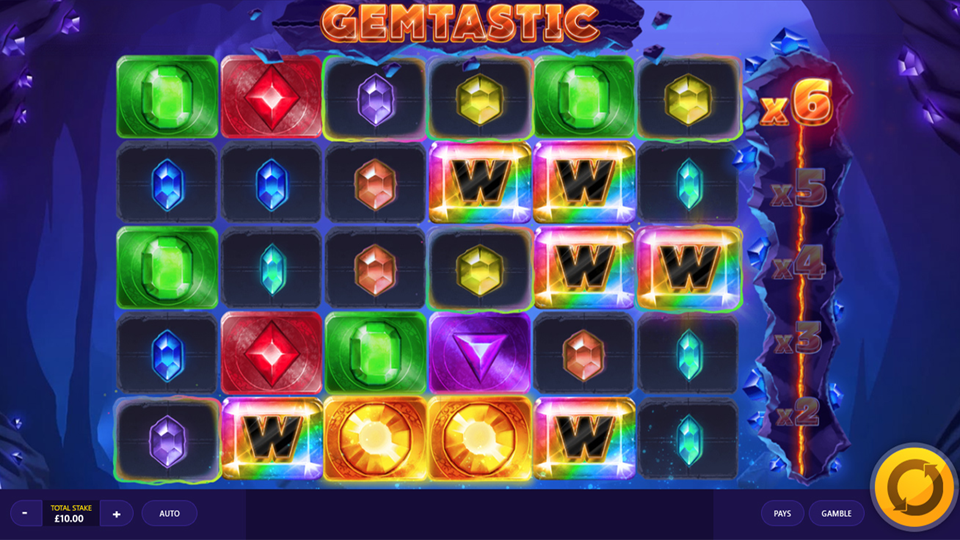 This is a classic slot machine that you can play for fun or for real money. In both cases, the main goal would be to line up 3 or more symbols of the same kind on adjacent reels placed from the leftmost.

Like in all newly-released games, Wilds will be used to improve the payline and also to replace all other items. When 5 of them appear on an active payline, lucky winners will claim the Gemtastic Big Win of 1.500 coins.

As a random event on any spin, you may see a particular gem sparkle with a multi-colored Magic Glow. When the glowing gems form a winning combination or just participate in one, they will disperse and turn into Wilds.

Mega Gems can be also affected and disperse into several smaller Wilds. Just for the record, each item comes in a "normal" 1x1 shape or appears as a Mega Gem occupying 2x2 or 3x3 space.

Following the path paved by the title, the paytable comes a plethora of gems of different colors, shapes and payout rating. The orange-shaped gem has the highest payout rating and 6 or more bring the Gemtastic Bonus prize of 240 coins.

When it comes to the betting prospects, plan your own strategy knowing that is possible to place a single coin per round. Their values range between €0.10 and €10.

1. What kind of special features can you expect?
Each consecutive win forces the Lava Multiplier climb higher on the Multiplier Meter. Winnings are multiplied by the number indicated on the meter and may go up to 15x. The counter resets at the end of each round and may hopefully stand out for the traditional Gemtastic Free Spins.
2. Are there any limitations when playing on a mobile device?
There’s no need to download the iPhone app or the Android .apk file to play online. The Gemtastic Free Play mode is also enabled.
3. What is the RTP factor of Gemtastic?
Gemtastic recension stays to the official RTP of 96.07% disclosed on the Red Tiger Gaming-powered sites.

Despite its modern outfit, this is a classic casino game that follows the unwritten rule of its mechanical predecessors and leaves players off the reach of any extra spins. On the other side, there is a variety of betting combinations and a chance to score much more than initially invested. For this noble cause, you’ll have to implement the Gemtastic tips since we talk about a high volatile slot machine recommended to the hardest core gamers.

Play Gemtastic at the best Red Tiger Gaming casinos online - reviewed and approved! Our recommendation is based on a wide range of aspects: they are accepting international customers, offer a broad range of payments for you, i.e. Visa, Bitcoin or MasterCard, and provide plenty of games from Red Tiger Gaming as well as other providers Playson, Wazdan or Lightning Box