An ancient temple hidden deep in the Amazon jungle, full of gold and riches – and it is your task to find it. Lost Temple is a slot powered by Lightning Box Games and was released in August 2013. The most striking feature of the game is the ‘temple steps’ bonus round, which consists of six different levels. This Lost Temple slot review will give more info about the game itself, including an FAQ section and tips on how to win.

We have no free play mode available yet, but take a look at the Lost Temple screenshots instead. Or why not simply giving a try with one of the recommended casino sites above? 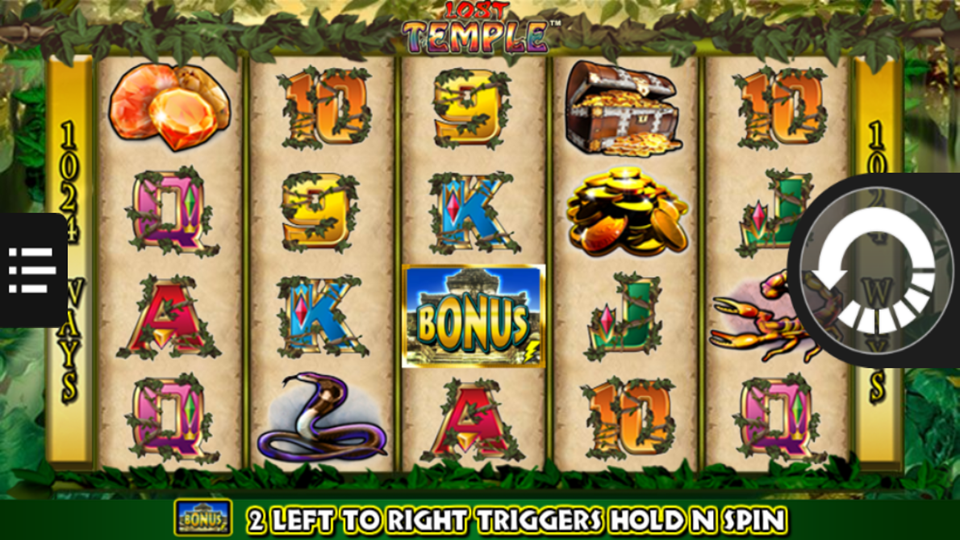 This slot has 1024 paylines, which is a number above average, 5 reels and 4 rows. It features a variety of symbols that you would expect to find in a mysterious jungle, including coins, diamonds and a menacing cobra. The jackpot is not progressive, but the highest-paying combinations amount to 10,000, with coin values ranging from 0.01 to 0.5 and offering 5 different betting levels. All of these combinations allow players to tailor the game to their own preferences. In addition to the wild symbol, the Bonus symbol brings excitement to the game. The latter doubles as a scatter and either 2, 3, or 4 of it unlock the hold’n’spin mode, where the Bonus symbols remain locked on the reels for an additional spin. 5 bonus symbols unlock the promising bonus game.

1. What kind of special features can you expect?
The ‘temple steps’ bonus game is the most exciting feature, which is unlocked by 5 Bonus symbols. The bonus game has 6 levels and consists of picking either a red arrow or a green arrow. Free spins and multipliers can be won, with the sixth level awarding 12 free spins and an 8x multiplier.
2. Are there any limitations when playing on a mobile device?
To play online on a mobile device such as an iPhone, the web version must be used, as Lightning Box Games does not currently have a mobile app or APK file available to be downloaded.
3. What is the RTP factor of Lost Temple?
The RTP of Lost Temple is 97.04%, which seems to be quite high a number. Check out the demo version and the paytable to get a feel for the odds and the best strategy.

This Lost Temple slot review has covered the basics of the game, but you can always play for fun using the free play version, which is available on several sites, if you want to give the slot your own rating. Overall, the game has an engaging theme, and the bonus round offers possible big wins for those who get enough bonus symbols to unlock it.

Play Lost Temple at the best Lightning Box casinos online - reviewed and approved! Our recommendation is based on a wide range of aspects: they are accepting international customers, offer a broad range of payments for you, i.e. Neteller, MasterCard or Bitcoin, and provide plenty of games from Lightning Box as well as other providers Endorphina, BGaming or Stakelogic