The Novomatic slot Magic Circle takes you back into an older era of video slots. People launching this video slot will directly notice the colourful vintage atmosphere of Magic Circle which may seem quite overwhelming at first. Our Magic Circle slot review will do its best to clarify all the seemingly complicated bonus features. We will also answer the question whether you can expect a free spins feature.

We have no free play mode available yet, but take a look at the Magic Circle screenshots instead. Or why not simply giving a try with one of the recommended casino sites above? 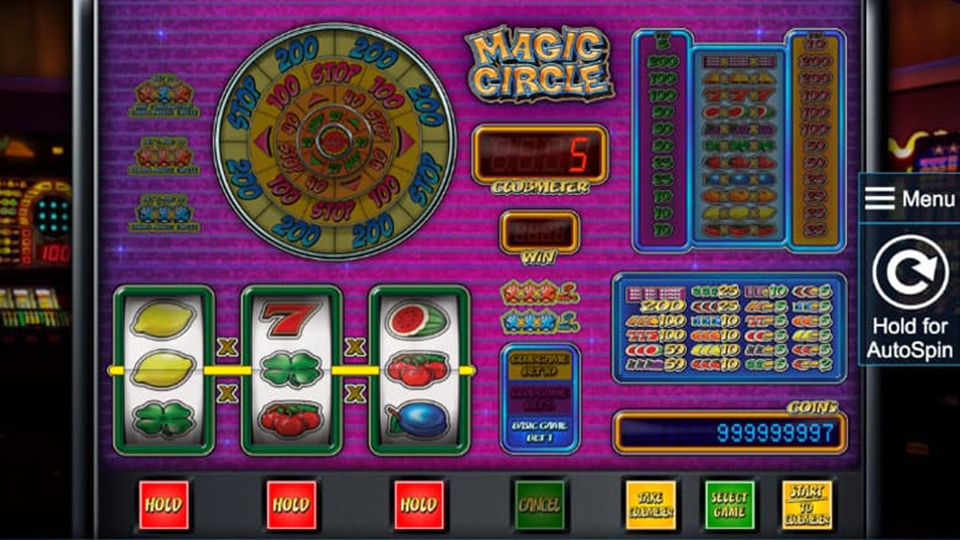 Magic Circle is actually not just one, but 2 games packed into one creative video slot. The base game is played on just one payline with the highest paying combination being the 3 ‘bar’ symbols, awarding you with a payline win of 200. Thanks to the Magic Circle bonus hold feature, players may hold up to 2 reels to keep them in position while spinning the other reels. The re-spin costs as much as a full spin. The Magic Circle bonus club game is played on a total of 27 paylines. A minimum win per spin of 20 is guaranteed during the bonus games. Players can take a bet that ranges from 0.01 to 5 per spin. Magic Circle doesn’t feature a free spins mechanism. You won’t find a progressive jackpot either. However, the 2 different games packed into one slot should make up for it. A free play version is available for everyone who would like to give it a try using fictional play money.

1. What kind of special features can you expect?
The most noticeable feature of Magic Circle is the interactive hold feature. A maximum of 2 reels can be held in place by using the ‘hold’ buttons integrated into the slot interface.
2. Are there any limitations when playing on a mobile device?
This vintage casino video slot can be played online on mobile Android and iOS devices alike without any limitations. Enjoy the game in your mobile web browser without the need for any downloads.
3. What is the RTP factor of Magic Circle?
Enjoy the acceptable RTP factor of this old-school slot of 95.02%.

Novomatic’s Magic Circle may seem confusing at first due to the overload of information that one is confronted with. However, once you get to discover more of the game with each spin, we’re sure you’ll quite like it. The old-school theme along with the great hold feature and the club game may turn you into a big winner while having a lot of fun. This is why we think that Magic Circle has deserved its good rating.

Play Magic Circle at the best Novomatic casinos online - reviewed and approved! Our recommendation is based on a wide range of aspects: they are accepting international customers, offer a broad range of payments for you, i.e. MasterCard, Bank Wire Transfer or Visa, and provide plenty of games from Novomatic as well as other providers Playson, Stakelogic or Lightning Box