Age of the Gods – Furious 4 is a 5-reel 3-row 20-payline progressive jackpot video slot game produced by Playtech as a part of the series of slot machines inspired by the Ancient Greek mythology. Featuring a new lineup of powerful gods, the game offers cross-platform compatibility, free play mode, tons of Free Spins, multiplied winnings and 4 rewarding jackpot prizes. To learn how to score a big win, read the Age of the Gods – Furious 4 slot review packed with useful tips.

Want to see how Age of the Gods - Furious 4 works? Select a recommended casino site from the list below and start playing for free or real – our screenshots will give you a sneak peek!

Age of the Gods – Furious 4 screenshots 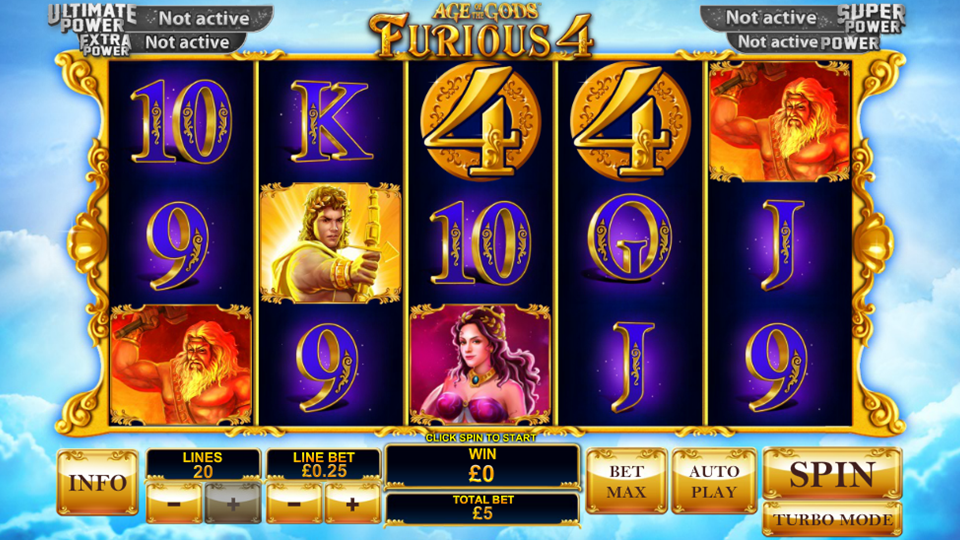 The paytable is a mixture of themed icons - Prometheus, Atlas, Pandora and Apollo and playing cards that pay significantly less. The Furious Wild has the highest rating of all icons thanks to its dual nature: working as a part of a winning combination, it can replace any other icon except the scatter, while a combination of 5 of the kind grants a big win of 10.000x your bet line. After each spin with a positive outcome, winners can trigger the Jackpot Bonus round and get a 4x5 grid with a task to collect 3 matching symbols, each representing a jackpot feature, whether it would be the Power, Extra Power, Super Power or the highly-rewarding Ultimate Power jackpot.

FAQ on Playtech Age of the Gods – Furious 4

1. What kind of special features can you expect?
Collect 3+ Scatters to activate the Free Spins bonus round with 12 extra spins and 4 unique features, each based on the specific god. In the Age of Fire, Prometheus will cover the entire middle reel and you’ll get 4 bonus spins. The Age of Light does the same, this time with Apollo as the Sticky Wild, while the Age of Curiosity covers the middle reel with Pandora icons, where each new landed increases the value of multiplier. Finally, the Age of Endurance grants 3 free spins and Atlas as the wild with the reel frozen until the end of this round.
2. Are there any limitations when playing on a mobile device?
The game is playable on mobile without a need to download any app.
3. What is the RTP factor of Age of the Gods - Furious 4?
The RTP vary from 94.88% to 96.80% on the Playtech powered sites.

Visually-attractive and able to produce massive winnings, the game tops the list of the most popular ones, even though the RTP is something we can’t actually call favorable.

Play Age of the Gods – Furious 4 at the best Playtech casinos online - reviewed and approved! Our recommendation is based on a wide range of aspects: they are accepting international customers, offer a broad range of payments for you, i.e. Visa, Bank Wire Transfer or Neteller, and provide plenty of games from Playtech as well as other providers Red Rake Gaming, Rabcat or Thunderkick