The progressive slot Roman Empire developed by Habanero Systems is inspired by the ancient Roman Empire. Try to score the various Roman-themed symbols, like the Colosseum, Cleopatra, a shield, a typical Roman helmet or a coin depicting Caesar. Our Roman Empire slot review will explain the meaning of each of these symbols, the free spins function and everything else worth knowing how to win.

Unfortunatly, we have no free play mode for Roman Empire available. Check out the screenshots below and hop right into action with one of the recommended casino sites! 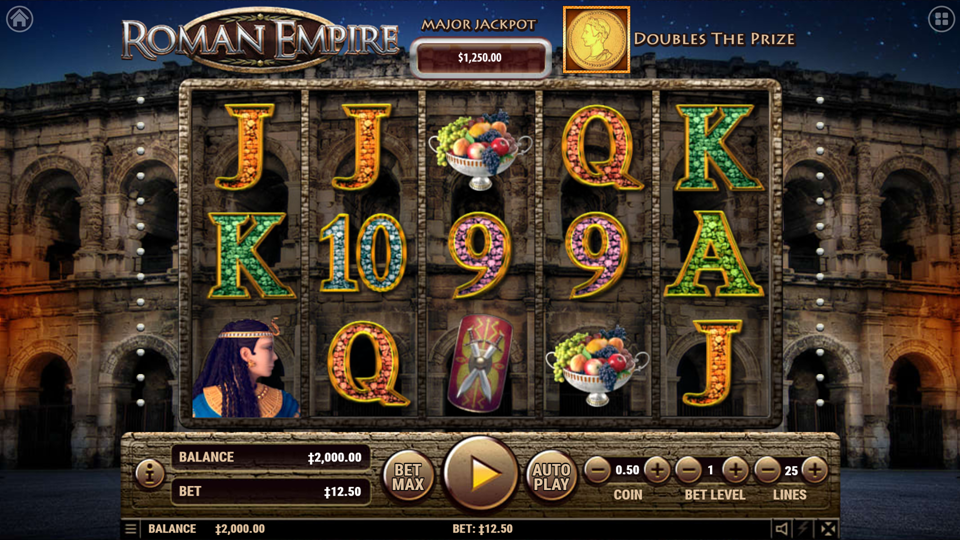 Roman Empire offers you 5 reels, 3 rows and a range of Roman-themed icons. Start your day at the Colosseum by determining your preferred bet size, which can lie between 1–10 coins per payline, a coin value between €0.01 and €20 and 1–25 paylines. You can bet a maximum of 250 coins or 5,000 in your currency. The Caesar Coin wild symbol replaces any other symbol except the Colosseum. Additionally, each winning combination including a Wild will pay double. The Colosseum is the scatter symbol. If you hit at least three Colosseum symbols, 13 Roman Empire free spins are launched. During this feature, all winnings will be doubled. Additionally, each Colosseum you hit during free games awards you with 1 additional extra spin. Upon each concluded spin, you may win the progressive jackpot, which is increasing with every bet. You have the chance to test the game for free thanks to the free play demo version.

1. What kind of special features can you expect?
The Caesar wild symbol will multiply your wins if it replaces any of the icons within a winning combination. This gives winners the chance to make up to 3,000 coins on just one payline. If your win amounts to a maximum of 1,000, you can gamble and double it in the Roman Empire bonus game.
2. Are there any limitations when playing on a mobile device?
Like all other slot machines by Habanero Systems, Roman Empire is fully compatible with mobile devices (Android and iPhone). You do not need to download an additional app to play online.
3. What is the RTP factor of Roman Empire?
The approximate RTP factor of the slot Roman Empire lies at 96.05% according to the official website of Habanero Systems. Play for fun and check out the paytable on the supported sites.

In sum of the Roman Empire recension we can say: During free spins, which are triggered by a minimum of 3 Colosseum symbols, you will see all of your wins doubled. You may also gain more extra spins in the process, with each Colosseum granting you 1 additional free spin. Thanks to the Caesar Coin, your winnings in Roman Empire may be doubled even during normal spins. So make a big win while finding your strategy.

Play Roman Empire at the best Habanero casinos online - reviewed and approved! Our recommendation is based on a wide range of aspects: they are accepting international customers, offer a broad range of payments for you, i.e. MasterCard, Neteller or Bitcoin, and provide plenty of games from Habanero as well as other providers Stakelogic, 1x2 Gaming or Red Rake Gaming