Rome – Rise Of An Empire is the latest addition to the Blueprint Gaming series of history-themed slot machines set in the peak of the glorious civilization once ruled the entire world. Built on the base with 5 reels, 3 rows, and 20 fixed paylines, the game comes with a local progressive jackpot prize standing on top of the rewarding features including 5 Modifiers and 5 unique Bonus rounds. Find more about them by reading the Rome – Rise Of An Empire slot review.

We have no free play mode available yet, but take a look at the Rome - Rise Of An Empire screenshots instead. Or why not simply giving a try with one of the recommended casino sites above?

Rome – Rise Of An Empire screenshots 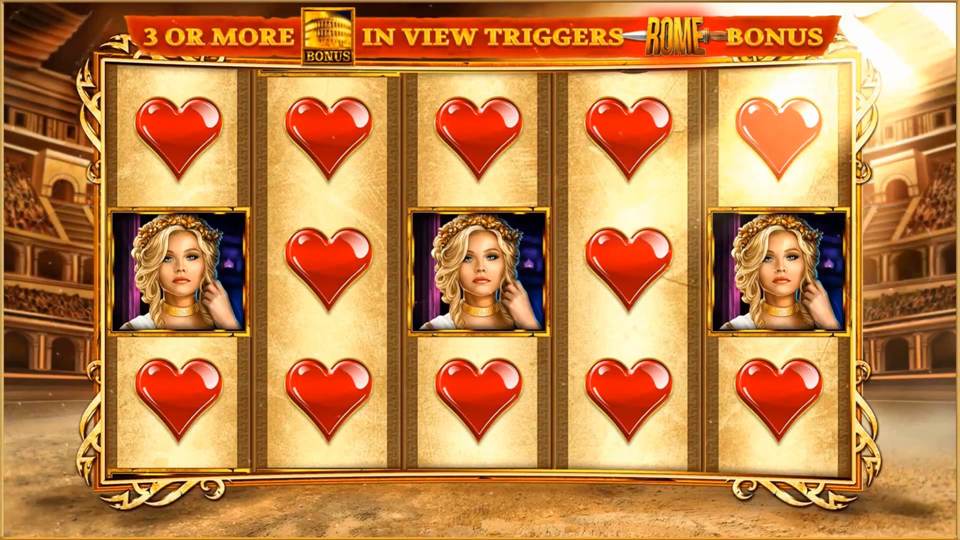 What comes first is a selection between the Rome - Rise Of An Empire free play and real money gaming. Those looking only to play for fun will be happy to hear there is a vast number of demo credits they can use to learn how to win making no additional investment.
Regardless of your choice, the coin value always remains in the range from €0.01 to €2.5 and it is possible to wager between €0.20 and €50 per round, according to your specific betting strategy. With an impressive background image taking you to the Coliseum itself, the paytable combines the most significant gladiators’ weapons including sword, helmet, and shields. Along with the Empress, they have much higher rating than suits of the playing cards.
During the base game, a tiger may step up on the scene and introduce 1 out of 5 possible Modifiers: Sword Strike that slashes the bottom row adding up to 3 symbol drops, Legion’s Glory with 1 to 3 Stacked Wilds, Symbolus Maximus with a random Multiplier, Spears of Destiny adding new high-paying items or Wilds, and Bonus Boost with more Scatters.

FAQ on Blueprint Gaming Rome – Rise Of An Empire

1. What kind of special features can you expect?
There is a maximum of 5 Rome - Rise Of An Empire bonus features determined by the Wheel of Fortune. Collect 3 Bonus icons anywhere on the reels and wait to see what will happen. Urn Riches is a classic “pick-me” game eventually leading to the Big Bonus that in “normal” cases require 5 Bonus items to start, Uprising destroys the fortress for cash prizes, Volcanic Cash adds an undefined number of Rome - Rise Of An Empire Free Spins with Multipliers between 2x and 10x, while the Empress’s Treasure grants 15 free spins with the Empress acting as an Expanding Wild.
2. Are there any limitations when playing on a mobile device?
You can play online on supported Blueprint Gaming sites using a mobile browser only because there is no need to download the iPhone app or the Android .apk file.
3. What is the RTP factor of Rome - Rise Of An Empire?
The RTP official info is still to be added to the Rome - Rise Of An Empire recension once the publisher decides to disclose the figure.

An action-packed and rewarding game with a valuable history lesson is something we can always recommend to a wider audience, no matter the actual experience level. Newbies will surely appreciate the Rome - Rise Of An Empire tips, while high rollers will look for a chance to score a local progressive jackpot prize.

Play Rome – Rise Of An Empire at the best Blueprint Gaming casinos online - reviewed and approved! Our recommendation is based on a wide range of aspects: they are accepting international customers, offer a broad range of payments for you, i.e. Bitcoin, Visa or Neteller, and provide plenty of games from Blueprint Gaming as well as other providers Endorphina, Stakelogic or Wazdan