Toki Time by Thunderkick is a slot based around cute and fluffy cartoon animals that live in a beautiful world, complete with rainbows, flowers, and stars. The design of the slot is quite juvenile, but very visually appealing, and the game has an intriguing “win both ways” feature which allows winning combinations to start on either the leftmost or rightmost reels. To find out more about the game, as well as some secret tips, read this Toki Time slot review!

Want to see how Toki Time works? Select a recommended casino site from the list below and start playing for free or real – our screenshots will give you a sneak peek! 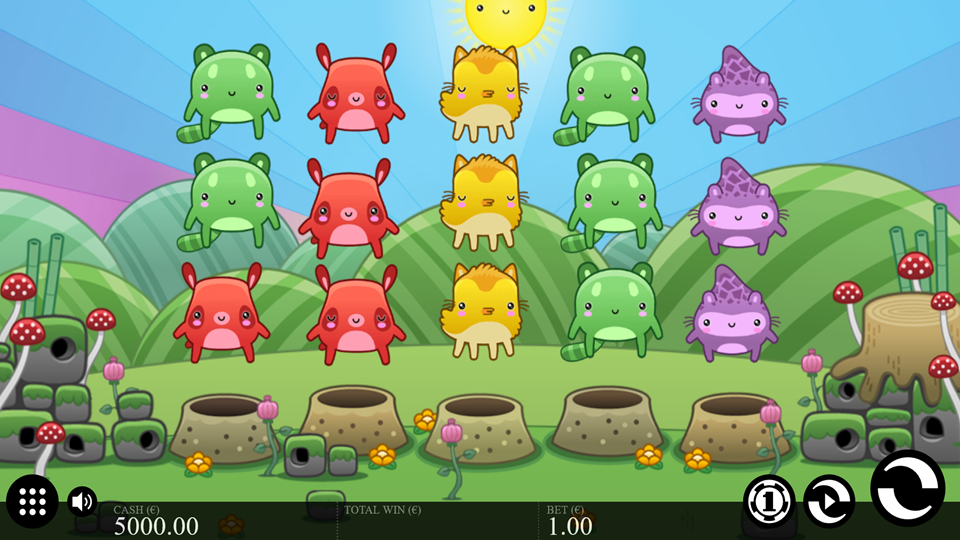 The layout of the slot is similar to many others – 5 reels and 3 rows. These are spun by pressing the button at the bottom right of the screen, upon which different fluffy animals are blown out of five tubes on the screen. To the left of this button is the autoplay option, where players have the chance to program the slot to automatically spin a certain number of times, giving the opportunity to collect winnings without having to do anything themselves. Finally, the leftmost button allows players to choose their bet values, with coin sizes ranging from 0.10 up to 100, and total coins per payline being fixed at 1. 11 is the total number of paylines, which is slightly unusual – but this is technically doubled as winning combinations are paid from right to left, as well as left to right. However, the game does not offer free spins, or a bonus game.

1. What kind of special features can you expect?
The game has an expanding wild symbol which is represented by a magical llama. This symbol only appears on reels 2 and 4, but can grow to fill up the entire reel and allow for even bigger winnings.
2. Are there any limitations when playing on a mobile device?
Thunderkick ensures that all its games can be played on all mobile devices without any issues, and they do not require an app to be downloaded. Instead, the game can be accessed through any web browser.
3. What is the RTP factor of Toki Time?
The RTP of the game is published as being 97.1.

Toki Time is an interesting slot that has a great graphic design and an incredibly simple interface, with all features including paytable, betting, and the autoplay feature being very easily accessible. However, its only special feature is the wild symbol which appears on two reels and can expand to fill them completely. The game has a free pay mode, where players have the option to test out the game before playing for real money, and it is available on the Thunderkick site.

Play Toki Time at the best Thunderkick casinos online - reviewed and approved! Our recommendation is based on a wide range of aspects: they are accepting international customers, offer a broad range of payments for you, i.e. MasterCard, Visa or Neteller, and provide plenty of games from Thunderkick as well as other providers Blueprint Gaming, Booming Games or Thunderkick