The highly-anticipated sequel to the TV-show-themed crossover set in the universe of one of the most popular reality games, Deal or No Deal: Double Action is a feature-packed title rich in rewards and balance boosting options. The latest addition to the PubFruit series produced by Blueprint Gaming, the game preserves its original dazzle keeping the Super Board active enriched with Crazy Cash, Money Box, Win Spins, Hot Shot, and more. Learn how to win them all after reading the Deal or No Deal: Double Action slot review.

A screenshot is worth a thousand words, right? Here you go! But in the end, you have to try Deal or No Deal: Double Action yourself – one of the recommended casino sites should fit perfectly! 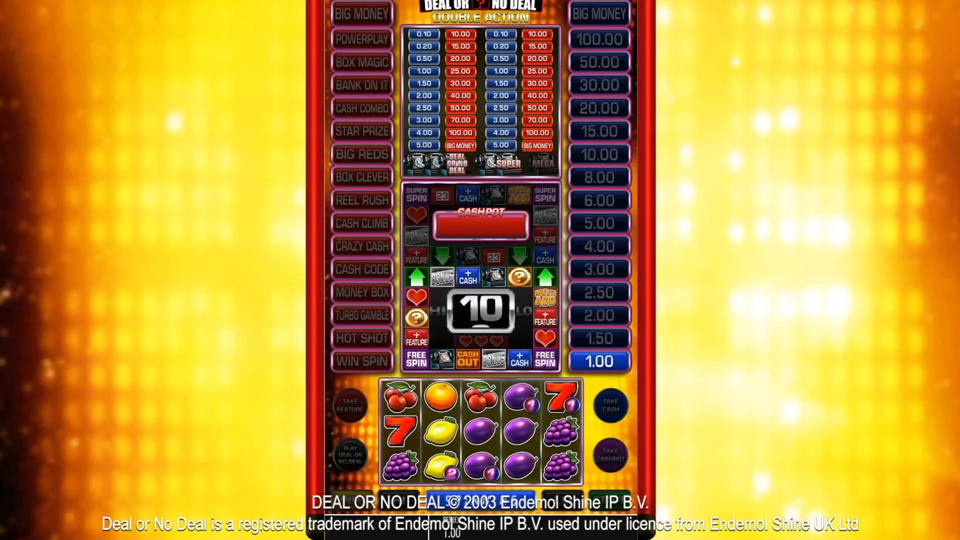 The game follows the same format as its television role model in the largest extent allowed by the concept of video slots entertainment. You will find an interesting mixture of a fruity-themed slot and a game where each new spin is a new winning prospect. Also, there’s a breath-taking Banker feature represented by the bakelite phone bringing the next best thing to the real-life experience.

Naturally, players should match 3 or more symbols of the same kind placed on adjacent reels to consolidate their ranks and activate the appropriate rewarding feature.

When talking about the paytable, experienced players already know what to expect from the one packed with tasty old-fashioned items such as Grapes, Plums, Cherries, Oranges, and Lemons. Their payout rating is slightly lower than Lucky Sevens’, but the lucky winners are still in a good position to take a significant amount of cash.

The Double Action mode means that you’ll have more betting opportunities and therefore is good to pass through them all and set up a proper betting strategy before the reels start spinning.

The Super more is the best way to land the Big Money prize but will stakes much higher than in the normal mode. Namely, the last-mentioned is where you wager between €10 and €100 per round as opposed to the wagers ranging from €0.10 to €5 per round. Remember the same goes for the Deal or No Deal: Double Action Free Play mode where all stakes are calculated in demo credits.

FAQ on Blueprint Gaming Deal or No Deal: Double Action

The Deal or No Deal: Double Action recension brings a fresh dose of excitement and more chances to stand out from the crowd. We presume the main prize won’t be an easy catch, but given its value, it’s surely worth your time and efforts.

Play Deal or No Deal: Double Action at the best Blueprint Gaming casinos online - reviewed and approved! Our recommendation is based on a wide range of aspects: they are accepting international customers, offer a broad range of payments for you, i.e. Visa, MasterCard or Bitcoin, and provide plenty of games from Blueprint Gaming as well as other providers 1x2 Gaming, BGaming or Eyecon