Ahoy! Play’n GO takes players on a pirate ship in one of its newest slots – Jolly Roger. Some fans of video slots may have grown tired of pirate-themed slots, as they are very common. However Jolly Roger adds its own special twists, including two different bonus games! To find out more about the game, read this Jolly Roger slot review and rating, or visit the Play’n GO site and use the free play mode.

Unfortunatly, we have no free play mode for Jolly Roger available. Check out the screenshots below and hop right into action with one of the recommended casino sites! 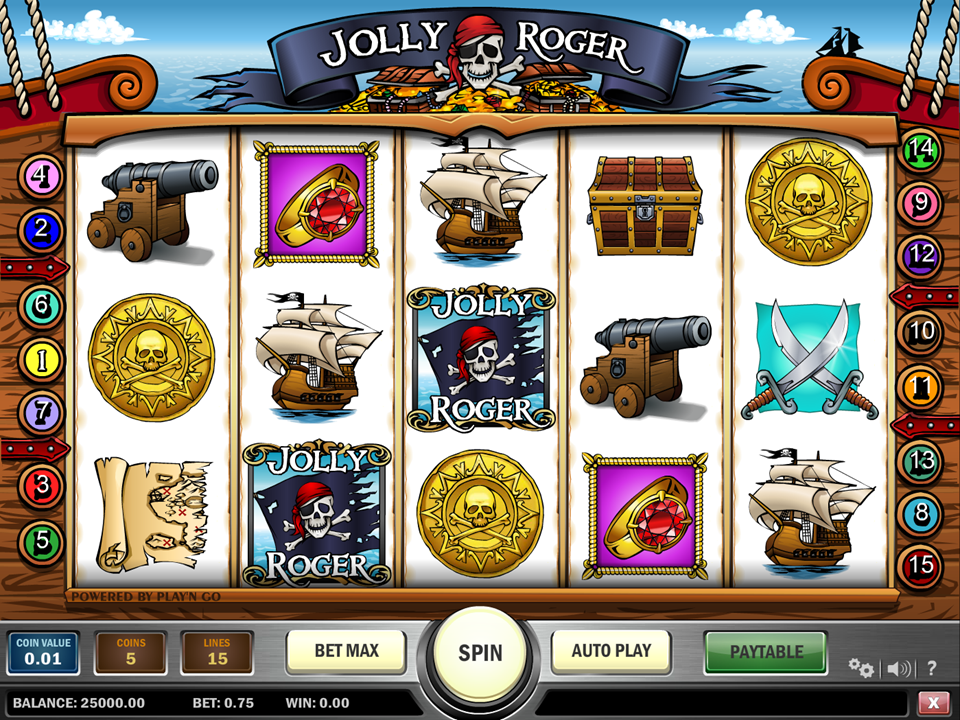 As soon as players open the game, they will realise that they are aboard a pirate ship. The jolly roger itself is flown at the top of the slot, with treasure chests overflowing with gold on either side. The slot is set among the wooden deck of the ship, with each symbol representing one aspect of pirate life. In total, there are 5 reels and 3 rows, with 15 paylines. These paylines are shown on either side of the slot, giving players an indication of their shape. Along the bottom of the screen, players can choose their coin values, which are between 0.01 and 1, and the number of coins per payline, which ranges from 1 to 5. Additionally, a link to the paytable can be found there, showing that the game’s jackpot is fixed at an impressive 80,000!

1. What kind of special features can you expect?
The Jolly Roger has not one but two bonus symbols! One unlocks the chest bonus, where players randomly choose a treasure chest, and the other unlocks the map bonus, where players must search for locations on a mysterious map.
2. Are there any limitations when playing on a mobile device?
No, the game can be played on a mobile without any issues. It does not have an app available to download, but can be accessed through the web browser of iPhones and Androids.
3. What is the RTP factor of Jolly Roger?
Play’n GO reports the RTP of the game as 94.98%.

Overall, Jolly Roger is a great slot, even for players who may have grown tired of pirate-themed games. The game has a relatively low RTP, and lacks Jolly Roger free spins, but the two types of bonus symbols make up for this. It is a great choice for fans of other Play’n GO slots.

Play Jolly Roger at the best Play’n Go casinos online - reviewed and approved! Our recommendation is based on a wide range of aspects: they are accepting international customers, offer a broad range of payments for you, i.e. Bitcoin, Neteller or Visa, and provide plenty of games from Play’n Go as well as other providers Leander Games, Booming Games or Endorphina