Defend your castle and deploy your troops all around the base of 5 reels, 3 rows and 20 paylines and play Kingdom´s Edge, the latest addition to NextGen portfolio of action-packed slot machines. With its recurring Multipliers, re-triggerable Free Spins and a jackpot of €5000, the game has a lot to offer no matter of your actual experience level. Read the Kingdom´s Edge slot review and learn how to win.

A screenshot is worth a thousand words, right? Here you go! But in the end, you have to try Kingdom´s Edge yourself – one of the recommended casino sites should fit perfectly! 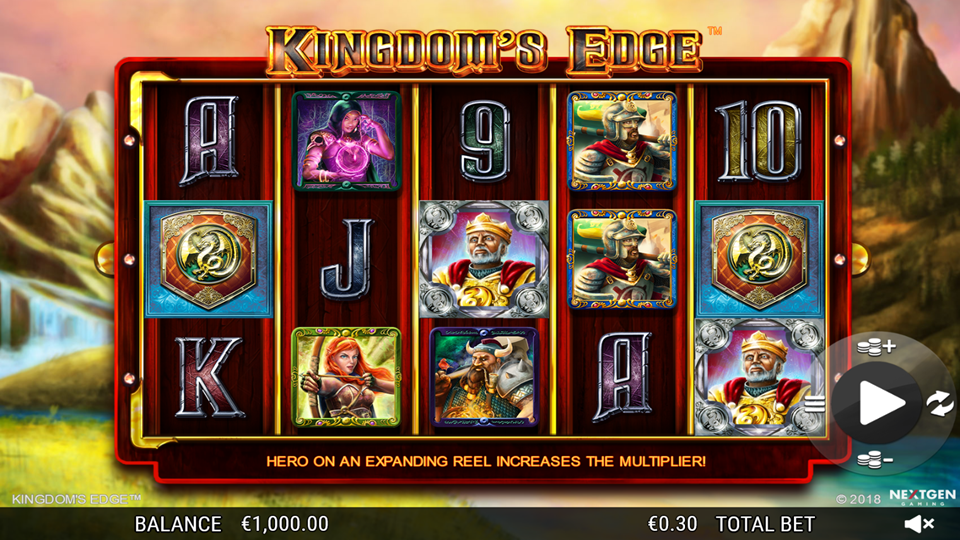 Your betting strategy heavily depends whether you play for fun or for the real money. Still, both modes come with the coin denomination between €0.01 and €5 allowing wagers in the range from €0.10 to €100. To receive a payout, you’ll be asked to form a winning combination with 3 or more symbols of the same kind placed from left to right on adjacent reels.
Themed icons are hand-drawn and represent a Huntress, King, Knight, Sorceress and Attacker, all with a higher rating than playing cards from Tens to Aces. It would be enough to collect only 2 of a kind and receive 2 coins, while a combination of 5 Knights pays a maximum of 50 coins. The second case scenario comes with a slightly lower payout of 2 to 10 coins for 3 to 5 playing cards combined.
Magical Shield works as the Wild replacing any missing icon from a winning combination except for the Scatter King. Once appears on the reels, it will trigger 15, 20 or 25 Kingdom´s Edge Free Spins for every combination of 3, 4 or 5 of a kind. During the Defend the Gates Free Spins Feature, you can also trigger the other Kingdom´s Edge bonus game closely described below. Let’s get back on the track: the Gold Wild Stack appears partially and nudges to occupy the entire reel, but when comes without a nudge, the winners will receive 5 to 10 randomly-awarded free spins.

1. What kind of special features can you expect?
Whenever the Gold Wild fills the entire reel 1, the Rally the Troops feature will start. During this round, if 1 or more Silver Wilds appear on the base, they will expand and cover its respective reel entirely. Any Hero symbol will increase the Win Multiplier by 1 up to 5x your stake, while Shields guarantee 1+ Extra Rally the Troops Spin. Finally, when the entire paytable is covered with Expanding Wilds, you will be one to claim the Legendary Win.
2. Are there any limitations when playing on a mobile device?
You can play online using any mobile device on various NextGen Gaming sites since this release doesn’t ask a player to download the iPhone app or the Android .apk file.
3. What is the RTP factor of Kingdom´s Edge?
The RTP official info is still to be announced by the publisher.

As each character has its captivating background story, it will take some time to get familiar with all of them. For that and many other good reasons, try the Kingdom´s Edge free play and get back to the battle once forged in the steel.

Play Kingdom´s Edge at the best NextGen Gaming casinos online - reviewed and approved! Our recommendation is based on a wide range of aspects: they are accepting international customers, offer a broad range of payments for you, i.e. Neteller, Bank Wire Transfer or Visa, and provide plenty of games from NextGen Gaming as well as other providers Blueprint Gaming, Lightning Box or Stakelogic