Scattered underneath the stormy streams, sprawls the dark monstrous Kraken and its bulky cache of coins. Leander Games takes you on Kraken Conquest, a game made for those who are not the faint-hearted but brave enough to face the gigantic sea creature turning powerful ships to the wreckage. The battleground is set on the base with 5 reels, 3 rows, and 25 paylines offering more than a few ways to get lucky: Wilds, Scatters, Kraken Slap, Lightning Strikes, and 2 Bonus games – one with Free Spins. Thunder drumbeats, the sea crashes, thunderbolt beams and here you are finding out more in the Kraken Conquest slot review, where is possible to learn how to win the main prize.

Want to see how Kraken Conquest works? Select a recommended casino site from the list below and start playing for free or real – our screenshots will give you a sneak peek! 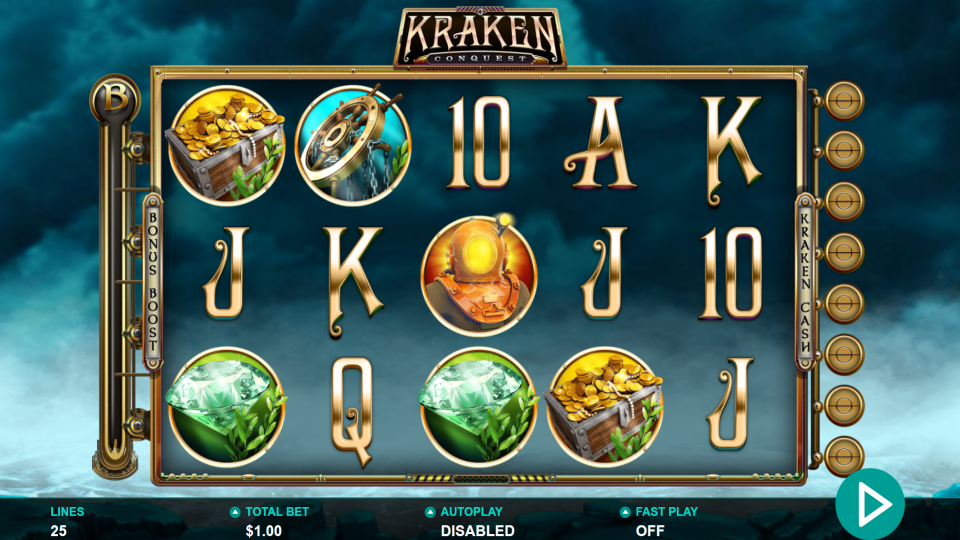 This is a steampunk-themed slot machine that takes you on a memorable adventure across the Seven Seas. According to your respective strategy, it is possible to play for fun or for real money, so before diving any deeper, choose the Kraken Conquest Free Play and receive a nice dose of demo credits to help you get started.

The game pays both ways, meaning you’ll consult the paytable whenever 3+ matching symbols appear on an active payline from both the leftmost and rightmost.

To keep you engaged, the provider introduced multiple rewarding features including the Lightning Strikes as an instant balance-booster made of cash, and the Kraken Slap, a Wild Column packed with Wilds that will help you form more winning combinations.

While on the main course, prospective winners have a chance to activate 1 out of 2 possible Kraken Conquest Bonus features. You’ll see 3 different types of Kraken’s tentacles, so try to collect 8 matchings and put them to the Kraken Cash meter. Moreover, each tentacle has a different Win Multiplier, so you’ll take better prizes as descending deeper under the ocean level.

During the clash, lucky winners will collect better prizes, extra lives, and finally reach the final stage. Get there and try to defeat the Kraken and ultimately claim its massive hoard of cash.

1. What kind of special features can you expect?
When 3 Scatters appear on reels 1, 3, and 5, or you manage to get a near miss adding power to the Bonus Boost Meter, the Kraken Conquest Free Spins will start. You will also enjoy the Free Spins Oculator with Increasing Multipliers, while the new batch of 3+ Scatters re-triggers the round with the same set of options.
2. Are there any limitations when playing on a mobile device?
You can play online using any mobile device on various Leander Games’ sites because there is no need to download the iPhone app or the Android .apk file.
3. What is the RTP factor of Kraken Conquest?
The RTP stands at 95.87%, according to the official info. The Kraken Conquest tutorial also sticks to this fact.

Graphically-rich and intense, the game abounds with volatility and excitement and it’s not a wonder why we recommend it to players with significant gaming experience. This is surely not an average 25-betway game you’ll see around every corner, so it’s more than advisable to apply the Kraken Conquest tips while trying to beat the beast and become the ultimate ruler of the ocean.

Play Kraken Conquest at the best Leander Games casinos online - reviewed and approved! Our recommendation is based on a wide range of aspects: they are accepting international customers, offer a broad range of payments for you, i.e. Neteller, MasterCard or Bitcoin, and provide plenty of games from Leander Games as well as other providers iSoftBet, Novomatic or Evolution Gaming