Inspired by the Ancient Greek legend about a greedy king turning everything he touched into gold, Thunderkick designed a themed video slot machine called Midas Golden Touch where you can actually turn your investment into no less than 10.100 golden coins. For this purpose, powerful tools like Wild Payline Multipliers, Scatters, Free Spins, and Sticky Respins will be used. This is a medium to high volatility game built on the layout with 5 reels, 3 rows and 15 fixed paylines of which you can read more in the Midas Golden Touch slot review.

A screenshot is worth a thousand words, right? Here you go! But in the end, you have to try Midas Golden Touch yourself – one of the recommended casino sites should fit perfectly! 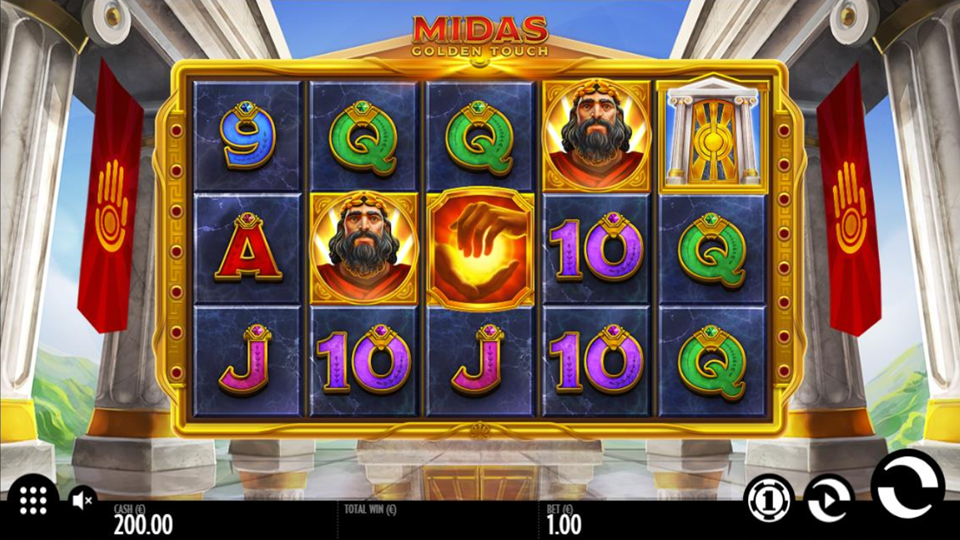 The number of active reels suggests this is a classic slot machine that requires 3 or more matching symbols on an active payline to release a payout. The same set of rules works in the Midas Golden Touch Free Play mode with the only difference you’ll receive demo credits instead of real money.

Like in all other themed slots, the paytable is crowded with items closely related to the background story, each with its own payout rating. Naturally, the game’s main protagonist pays the highest prize, so 3, 4 or 5 Midas on an active payline brings 10x, 20x or 75x your stake.

Items turned gold is the second-best choices awarding between 4x and 25x the line bet for combinations of 3 to 5 of a kind. On the other side, you’ll find lower-paying cards from Nines to Aces able to produce 1x to 7.5x your stake.

Wilds replace all other symbols but the Scatter, which is needed to activate the Midas Golden Touch Bonus game. Thanks to its dual nature, Wilds also turn the belonging payline into Wild Payline Multiplier that will improve the line bet depending on the number of associated Wilds. This way, you can boost the bankroll 2x, 4x, 8x, 16x, or 32x. Furthermore, 5 Wilds on an active payline brings a big win of 75x the line bet.

1. What kind of special features can you expect?
The Midas Golden Touch Free Spins round starts whenever you manage to get 3, 4 or 5 Scatters. Lucky winners will receive 10, 15 or 20 spins at the casino’s expense where each win triggers the Sticky Respins feature. When activated, it will keep all winning symbols locked to the base and keep the rest of the layout spinning normally. Moreover, a Random Wild will be assigned before each round starts, while 3+ Scatters trigger an additional batch of 10 extra spins.
2. Are there any limitations when playing on a mobile device?
There is no need to download the iPhone app or the Android .apk file in order to play online. It is possible to play for fun and for the real money around the Thunderkick-powered sites.
3. What is the RTP factor of Midas Golden Touch?
According to the official info disclosed by the publisher, the RTP stands at 96.10%, so our Midas Golden Touch sticks to the fact.

This is an easygoing game with catchy graphics and a classic set of rules suitable for any betting strategy. Tips gathered in the Midas Golden Touch tutorial should do the trick when it comes to boosting your winning potential, so try them on if you please.

Play Midas Golden Touch at the best Thunderkick casinos online - reviewed and approved! Our recommendation is based on a wide range of aspects: they are accepting international customers, offer a broad range of payments for you, i.e. Neteller, Bitcoin or MasterCard, and provide plenty of games from Thunderkick as well as other providers Big Time Gaming, NetEnt or GreenTube