Leaving frozen London and taking you to the Neverland, GameArt lets you fly to the new Peter’s Universe – a cyberpunk scenery of a forgotten land where evil Captain Hook is desperately trying to see Peter Pan’s head off. Built on a 5-reel 3-row 100-payline layout, the game brings Random Feature in base rounds, Expanding Wilds, and Free Spins finally leading to the jackpot of 1.000 coins. Learn more in Peter’s Universe slot review

We have no free play mode available yet, but take a look at the Peter’s Universe screenshots instead. Or why not simply giving a try with one of the recommended casino sites above? 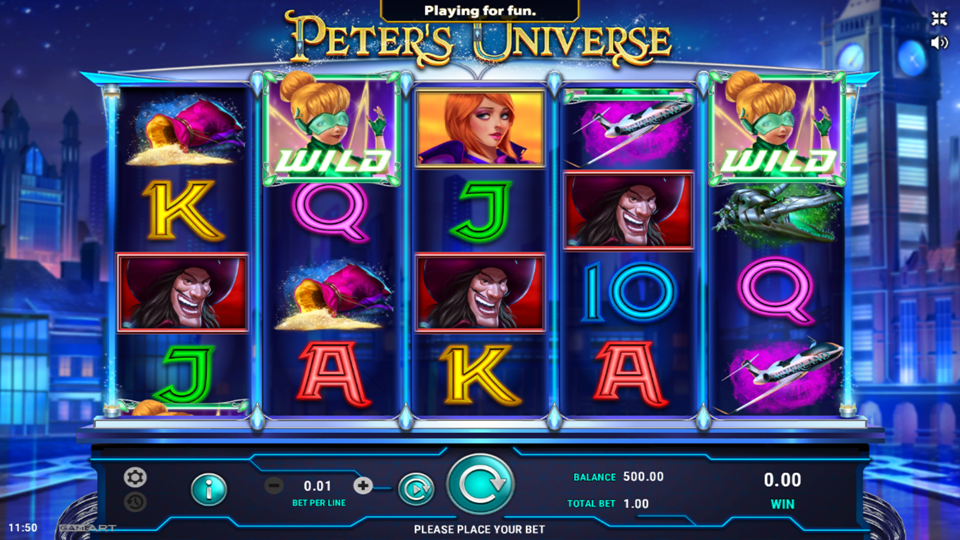 Before the Thrilling Journey to Neverland starts, see will you play for fun or for real money. Thanks to the abundance of demo credits, Peter’s Universe Free Play is where you can learn how to win and pay nothing in front. In any case, the coin value goes from as low as €0.01 up to €1, so you can wager between €1 and €100 per round, according to your betting strategy.

Tinker Bell is the Wild and uses its cyberpunk magical dust to improve the payline or stand as a substitute for any other symbol but the Scatter. Speaking of which, it looks like our old boy himself and is able to activate Peter’s Universe Bonus games.

Let’s just take a closer look to the Wilds as they can also trigger the Walking Wild feature when appeared on the reels 2, 3 and 4. You will receive 1 re-spin during which the Wild moves 1 reel left awarding another re-spin. The feature ends when the last Wild reaches the first reel.

Now, symbols on the paytable represent characters from the fairy tale, where notorious Captain Cook has the highest payout rating and pays up to 1.000 coins for a combination of 5 of a kind. Wendy brings between 20 and 500 coins, while the other symbols pay 1 to 250 coins, depending on their number and values.

Players looking for an extra balance booster can use the Gamble feature and improve their bankroll up to 5 times. To make it happen, try to guess the color of a card coming from a standard deck of 52. Each correct answer grants a Multiplier of 2x, while the first wrong reply leaves you empty-handed.

1. What kind of special features can you expect?
When 3, 4 or 5 Scatters land anywhere on the reels, lucky winners will activate Peter’s Universe Free Spins and receive 4, 5 or 6 Planets, respectively. Before the round starts, players will have to pick 1 out of 5 rewarding features including cash prize, additional spins, random Multiplier, Wild Reel 2 or Wild Reel 4. You have 20 planets of which only a selected few may reveal the bonus feature, so pick wisely.
2. Are there any limitations when playing on a mobile device?
You can play online on GameArt-powered sites using any mobile device. No need to download the iPhone app or the Android .apk file.
3. What is the RTP factor of Peter’s Universe?
The Peter’s Universe recension sticks to the official RTP info of 96.10%.

With all the familiar characters set in new scenery, the game has what it takes to attract players of all experience levels. An interesting mixture of themes, this is an interesting and worthwhile release where Peter’s Universe tips will help you score the big win faster.

Play Peter’s Universe at the best GameArt casinos online - reviewed and approved! Our recommendation is based on a wide range of aspects: they are accepting international customers, offer a broad range of payments for you, i.e. Neteller, MasterCard or Bitcoin, and provide plenty of games from GameArt as well as other providers Leander Games, Wazdan or 1x2 Gaming