Pride and Prey is an African wildlife-themed video slot game produced by Scientific Games built on the 5-reel 3-row 20-payline layout and with a static jackpot of 4.000 coins. Packed with innovative Rewards, of which you can read more in Pride and Prey slot review, this is a game that pays more than ever expected.

A screenshot is worth a thousand words, right? Here you go! But in the end, you have to try Pride and Prey yourself – one of the recommended casino sites should fit perfectly! 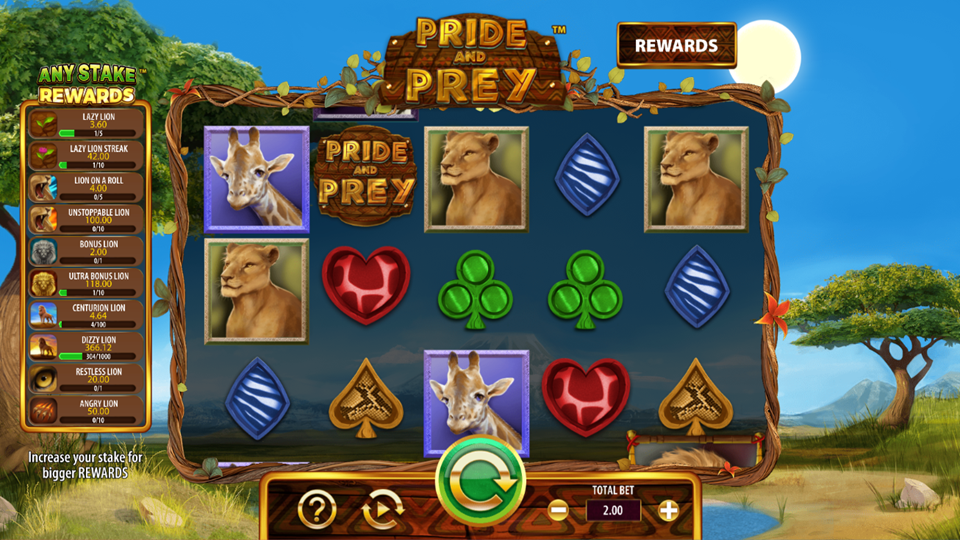 Naturally, it is possible to play for fun or for real money, where the Pride and Prey Free Play packs demo credits to your balance allowing players to learn how to win and pay nothing in front.

Wild can replace all other items but the Scatter, which is needed to take you to the Pride and Prey Bonus feature. For 3, 4 or 5 Wilds on an active payline, lucky winners will take 300, 1.000 or 4.000 coins, respectively.

Rewards are built over time and depend on your accomplishments. When a Reward is achieved, you will get paid as per corresponding paytable occupying the entire left part of the screen, as described below.

Lazy Lion starts after 5 non-winning games in a row, while the Lazy Lion Streak needs 10 in a row to pay 1x or 15x the average investment, respectively.

With 5 consecutive winnings, you’ll activate Lion on a roll and take a 2x average stake, while Unstoppable Lions shows after 10 wins granting 50x the stake.

When a single Scatter lands on the reels, you will trigger the Bonus Lion and receive 1 free spin with 1x applied to the average stake that triggered the feature. The same goes for Ultra Bonus Lion but prizes are 10 spins and 10x the stake.

Finally, Restless Lion combines 1 free spin and 10x the stake, while Angry Lion steps up after 10 slashes within a single free spin game awarding 25x the stake it was earned on.

When your balance becomes lower than the previous total bet, you’ll be offered to activate the Wager Saver and spin the wheel to increase balance 1x, 3x or 5x.

1. What kind of special features can you expect?
When hearing 3 lions roar on the reels 1, 3 and 5, you should just stand still and take their Pride and Prey Free Spins. Initially, you’ll be rewarded with 8 games during which randomly-slashed symbols will turn into Wilds. Another 3 Lion Scatters grant 4 additional spins.
2. Are there any limitations when playing on a mobile device?
Play online using a mobile device on Scientific Games sites. You won’t have to download an app for Android or iPhone.
3. What is the RTP factor of Pride and Prey?
According to the official info, the RTP stands at 97.52% and is approved in our Pride and Prey recension.

With more rewarding options that we were able to describe in a few words, this is a game recommended to players of all experience levels. Hopefully, the Pride and Prey tips will help you overcome the fear of unknown and score the big win faster.

Play Pride and Prey at the best Scientific Games casinos online - reviewed and approved! Our recommendation is based on a wide range of aspects: they are accepting international customers, offer a broad range of payments for you, i.e. Neteller, MasterCard or Bitcoin, and provide plenty of games from Scientific Games as well as other providers iSoftBet, Novomatic or GreenTube