In Dark Queen, EGT adapts the magical fairy-tale of snow white and impresses with a beautiful interface with 5 reels, 3 rows and 20 magical pay-lines. This game offers players a mysterious atmosphere on top of a slew of intriguing slot features. In this Dark Queen slot review, we’ll tell you all there is to know about it.

A screenshot is worth a thousand words, right? Here you go! But in the end, you have to try Dark Queen yourself – one of the recommended casino sites should fit perfectly! 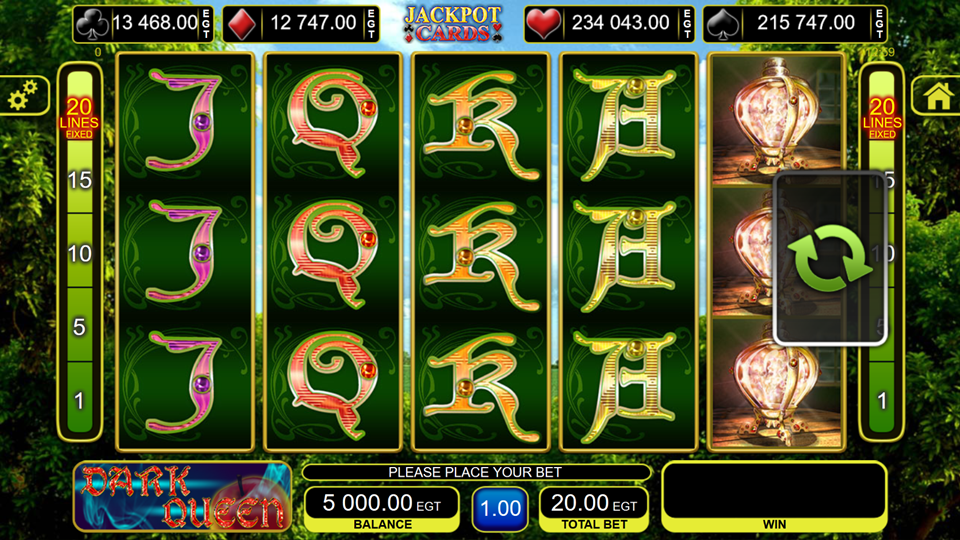 Enter the magical forest with your personal betting amount which can lie between 20 and 400 per spin. The first bonus feature is the Red Apple: the Wild will replace any other symbol except for that one. It will appear on the first reel and act as an additional Wild. This one will automatically transform all letter symbols into Wilds, thereby increasing the player’s chance to score a high-paying winning combination. The second bonus feature happens randomly at the end of each round: pick 4 from a 12-card deck. If you reveal 3 of the same suit, you’ll be awarded a progressive jackpot of the same suit. The interface features an auto-play option with which you may have your spins of the magic reels triggered automatically. There are no Dark Queen free spins or free play features included in the slot.

1. What kind of special features can you expect?
Aside from the two bonus features, there is a Gamble game. If you guess the colour of a card correctly, then you’ll double your winnings. If you’re wrong, then you’ll lose everything.
2. Are there any limitations when playing on a mobile device?
No. Play it on Android and iPhone devices freely. No need to download any app.
3. What is the RTP factor of Dark Queen?
The official RTP factor of Dark Queen is 96.04 %.

One would think that the lack of such conventional features as free spins would bring the rating of Dark Queen down, but EGT made up with an extra Wild feature that actually helps you win big. To wrap up this Dark Queen slot review, we would like to point out that EGT did a good job with the visuals of this game. It’s captivating, enchanting, and it can turn your luck to money.

Play Dark Queen at the best EGT casinos online - reviewed and approved! Our recommendation is based on a wide range of aspects: they are accepting international customers, offer a broad range of payments for you, i.e. MasterCard, Neteller or Bitcoin, and provide plenty of games from EGT as well as other providers 1x2 Gaming, Red Rake Gaming or Leander Games