Featuring Collection Bonus and Super Stacks, Golden Three Kingdom is an Asian-themed slot game produced by High5Games that takes you to medieval China right in the center of noble families’ clash for the throne. Built on the layout with 5 reels, 3 rows, and 40 fixed paylines, the game pays a static jackpot of 5.000 of which you can read more in the Golden Three Kingdom slot review.

Unfortunatly, we have no free play mode for Golden Three Kingdom available. Check out the screenshots below and hop right into action with one of the recommended casino sites! 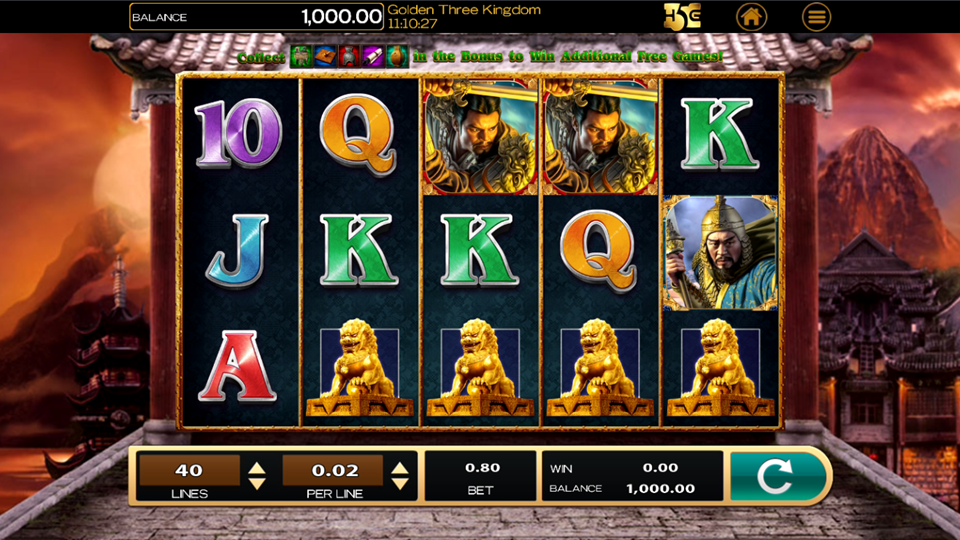 Set in the scenery of a war-ravaged temple, this is a classic slot game, at least in the terms of gameplay. This means you have to line up 2 or more symbols of the same kind on adjacent reels from the leftmost to collect the prize according to the paytable.

Wild can substitute all other symbols but the Scatter and Collection Bonus symbols. When 2, 3, 4 or 5 Wilds appear on an active payline, lucky winners will score the big win of 20, 100, 500 or 5.000 coins, respectively. Just to say that any Scatter grants a Multiplier of 1x if being a part of a winning combination and activates the Golden Three Kingdom Bonus Game.

Reels contain stacks of symbols able to transform into any icon you’ll find on the paytable. Speaking of which, there is a combination of themed items such as warriors, a golden lion and jade frog. Depending on their payout rating, you can take 3 to 200 coins for combinations of 2 to 5 of a kind.

You will also find traditional lower-paying icons of playing cards including Tens, Jacks and other, all the way up to Aces. Such combination pays between 2 and 30 coins.

1. What kind of special features can you expect?
The game comes with 5 different Scatters as Collection Bonus symbols, each appearing on a different reel. When all are collected, you will receive 7 Golden Three Kingdom Free Spins. This feature can be re-triggered up to 4 times granting a maximum of 28 extra spins. Before the round starts, players will pick Scatters to reveal which Warrior symbol turns into Super Stacks. Moreover, if you manage to match up a winning combo on the last spin, the score will be multiplied 10x.
2. Are there any limitations when playing on a mobile device?
Players will be able to play online on their mobile device, but for this purpose, you need to download an app for Android or iPhone directly from the App Store or Google Play Store, respectively. Players with Facebook accounts can try the Golden Three Kingdom Free Play mode as well, presuming they have enough game credits to start this title.
3. What is the RTP factor of Golden Three Kingdom?
Golden Three Kingdom tutorial approved the RTP official info of 96.00%.

We said many times that games inspired by Oriental culture and history pay significant amounts of cash and the same goes for this visually-appealing and action-packed title. The house comes with an advantage, so taking the Golden Three Kingdom tips seems like a good idea, no matter your gaming experience.

Play Golden Three Kingdom at the best High5Games casinos online - reviewed and approved! Our recommendation is based on a wide range of aspects: they are accepting international customers, offer a broad range of payments for you, i.e. MasterCard, Bitcoin or Neteller, and provide plenty of games from High5Games as well as other providers Play'n Go, Novomatic or GreenTube